Friday 19th It’s my mum’s 50th birthday on Monday so our family plus Jake and Connor all went to the Yang Sing Chinese restaurant in Manchester this evening. 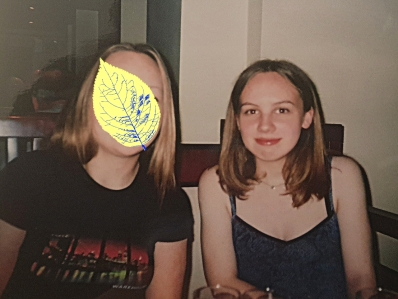 Before we went, I got upset because I’d just found out Abby and Connor went to a kickboxing weapon training thing today but they hadn’t told me about it. Even if I hadn’t have gone, it would’ve been nice if they’d checked. Then Mum started mithering me to take Mollie for a walk while I was trying to wrap her presents. I just got pissed off and ended up crying all over Jake.

The meal this evening was really nice though. They made up a banquet for us when we got there and we had all sorts of food. We had the usual ribs and rice and stuff but then there were other things like mussels, squid, scallops and ostrich. They ostrich meat was sooo nice! I’ve never tried some of those things before and I was a bit wary at first but then pleasantly surprised when I tried them.

Saturday 20th I went to Manchester with Jake today in search of a dress for my college leaving do in June. I didn’t end up getting one though. I really can’t shop properly with him cos I’m aware of him getting bored and then it rubs off on me! All I got was 2 bottles of nail varnish and an O’Neill purse to replace my other one that’s bursting a bit.

On the train, Jake told me that Matt Carrera and Samantha Breck (his mates) want him to go and stay with them at Huddersfield Uni sometime soon. I really don’t want him to go. Initially, I was worried that Samantha will have loads of girly mates and they’ll fancy him cos he’d be someone new to them and good looking.

Then I realised that if he goes now then he’ll know his way round by the time we both go in September. That wouldn’t be much fun with him telling me everything cos he always seems to do stuff first (e.g. snowboarding) that he says we’ll do together. I’d rather discover it all WITH him and don’t want him to spoil that too.

Then there’s the fact that Samantha has a definite bitchy streak and has showed it to me many times and I don’t want her poisoning him against me. She tried to put me off going out with him in the first place, even though she’s his “best friend”. I found out tonight that she even told my sister that it might not be a good idea for him to get into a relationship with me. Grrr!! I didn’t listen to her, obviously!

The reason she doesn’t like me is pathetic anyway. About 4 years ago, on the way back from the Austria ski trip, my best mate at the time (Emma T) ripped Samantha’s magazine accidentally and she’s held a grudge against us ever since. Sad!

Anyway, I understand that he wants to see his friends and stuff, and it’d be really selfish of me to stop him going but I still don’t like the idea.