Thursday 13th I’ve got loads of things going on tomorrow. I’ve got a French test 1st thing, footy at lunch, orchestra after school and maybe the cinema in the evening. [That’s 4 things. 4 things doesn’t count as ‘loads’.]

I’m not sure I wanna go to the cinema anymore coz even more people wanna meet us there. There’s supposed to be me, Emma, Ed and Dougie who were going originally then Ed asked Davis and Neil Kennedy. Davis asked Lizzie and she’s going with Olivia and Freda. Somebody has also asked Lindsey Bullman, Josie Nichol and Jill Baines. 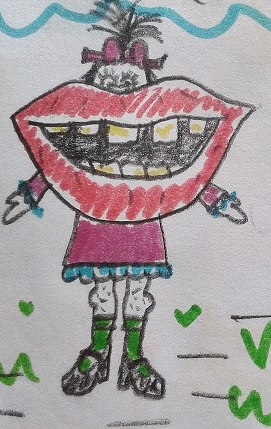 [This is Lindsey Bullman. Needless to say, I didn’t like the girl. She was an utter cowbag.]

It’s not fair. It started off just 4 of us going and now there’s at least 12 people going. If we all go and see the same film we can’t sit together but hopefully that won’t happen.

Emma and I phoned Ralph this evening to see if he wanted to come with Freddie so that we would have someone going that we didn’t mind that probably wouldn’t ignore us. He said he couldn’t coz he had Air Cadets or summit.

Freddie’s not gunna wanna come without Ralph. So, now me and Emma have decided to try and get Dougie to come with us to see summit different to everyone else and Ed too if he wants. I can’t decide if they’ll want to stay with the big crowd though. I s’pose I’ll just have to see what happens.

I’m worried about soccer too coz the lads’ll probably come over and watch. It’ll be embarrassing coz they’ll just take the piss!