Monday 2nd It’s still really hot here but it’s been raining this evening. It went a bit stormy again this afternoon so I went and sat next door on the edge of the chapel field because now the crops have been chopped down, you can see right across the fields. Mollie can see now too so she came and sat with me. I could exactly where it was raining and in which direction it was going and I saw some of the lightning. The sky was all pink behind the dark grey clouds so it was obvious to see where the rain was heaviest.

I came inside when it started raining on me and when Mum came out with the camera and took a photo. She said it’s usually photos of me staring out to sea but instead this one will be of me staring out over the fields. She really made me jump. I was miles away, just thinking. 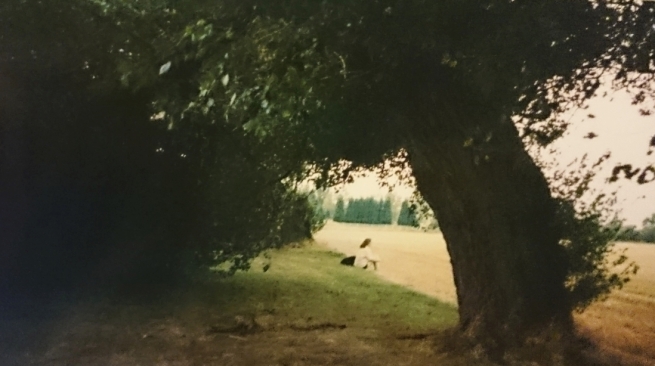 I went to the next village again with Hayley tonight. She was a bit less annoying than last time. I think she felt a bit left out when she was with me and Milla because Milla has exciting stuff to tell about Australia and I had stuff to tell from Belgium and that week’s parties but she hadn’t done anything even slightly interesting.

We didn’t do much tonight either but she’s decided she wants to go to The Plough one Friday night. It can get really lively in there and it’s full of lads so it shocked me quite a bit when she suggested it. Then I found out that she’s only allowed to go if one of her older sisters or brother goes too!