Wednesday 4th Lena Hall told Ferny I fancy him. I don’t think they were lying coz Hayley told me and Lena admitted it. They said he asked, “Which Tess?” and looked embarrassed. Ahh!

I told Dougie that he was going to blind someone with that coat of his outside Geography. He didn’t look very impressed! He kept asking me and Lizzie to go to the library with him but Miss wouldn’t let us.

I went to see the school’s production of Grease tonight. Everyone said we had the crap cast but they were all really good. I’ve underlined the cast we had in the programme. →

It was really good and there were quite a few people I know in it.

I’ve never been down B Block stairs so fast before today after I saw Ralph and Ferny behind me. I think Ferny spotted me looking at him actually. I’m still not sure if he knows who I am.

I’ve got a new teacher for P.S.E. tomorrow and I dunno who or where. It also looks like I’m gonna be on my bill again coz Poppy has been off nearly all week.

Abby and I have got the Titanic soundtrack. It’s not as good without the film but it’s still brilliant.

I told Robert Osborne I fancied Ralph today. Well, I was actually being sarcastic but he took me seriously and said he was gonna tell him! Oh no!

Tuesday 3rd I found some pics from Titanic on the internet. They’re small, not very clear and not very good but they’ll do for now. I also found a couple of Leo DiCaprio that Freda gave me ages ago. 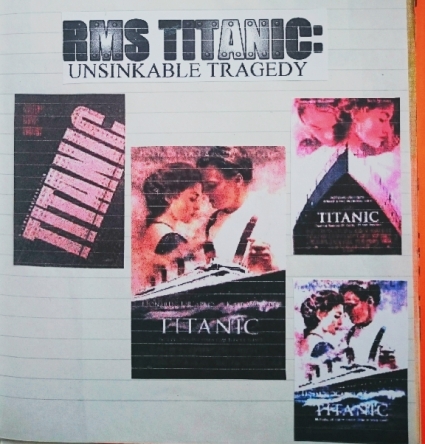 I’ve not had a very good week so far. Yesterday, I got bollocked by Dad coz Abby paid me 10p to walk home with her. Tonight, I got in trouble for, er… I can’t remember what but I was arguing with Abby about something and Mum and Abby were using me as a punch bag, I think!

I had another disagreement with Mum a few minutes ago as well coz she has to write a note for skiing mentioning that I’m “on antibiotics, minocycline, for her skin”. She (Mrs L) doesn’t need to know what it’s for, does she? She can know what they are called but I don’t want her knowing what they’re for. Any doctors in Austria can look it up if they have to.

I don’t want Mrs L knowing what’s wrong with me. It’s bad enough having the school nurse know coz she started telling me how I could help get rid of spots, like I don’t already know! I wouldn’t be on tablets if I didn’t need to be, would I? If there was summit else that worked I’d be trying that.

I dunno if I fancy Will F. or not now. It was just I saw him with his sister (Year 8, I think) last night after school coz their parents hadn’t picked them up. He just looked nice, I s’pose.

Oh, I dunno. I don’t really know him. [That didn’t normally stop me fancying someone.] He probably doesn’t even know I exist but if I tried to get someone to ask him to come ice skating, everyone would think I fancied him.

Emma and Hayley already do think that. I told Emma that I was trying not to let myself like him last night and I told Hayley in Maths to take no notice of owt Emma says about it. Hayley nearly went out with him once but changed her mind at the last minute. She told me today that he’d probably go out with me coz he was desperate for a girlfriend. [Charming!] I think she’s thinking too far ahead!

P.S. Freddie tried to push Ralph into me after school but fortunately it didn’t work. Ralph wasn’t looking at me but he knew I was there, he just walked along staring at the ground whilst trying not to smile, I think.

It was also the 1st performance of Grease in school today but only for the primary schools. I’m going to see it on Thursday.

Sunday 1st Sorry, it’s late. This will only be short.

The film I went to see, Titanic = brilliant, sad, moving music. Tell you more another time.

Monday 2nd Mr H, an I.T. teacher at school, died yesterday. He’s had stomach cancer since, well, a while but he found out in December. Mrs K was telling us how ill he was on the way to Runcorn so I was half expecting him to die but not so soon. All the teachers, especially Mrs N who was his mate, were really upset.

Titanic yesterday was absolutely brilliant. I can’t describe it. It was just so realistic which I think is why it was so sad because it makes you think about what all those people must have been going through. Plus Leo DiCaprio was in it and he is just so gorgeous.

Near the end, he dies and he sinks under the water coz the girl, Rose (Kate Winslet) lets go of him. It’s so sad. You just fall in love with him, especially as Jack in this film coz he was lovely.

Uh, you’ll have to see it, I just can’t find the words. 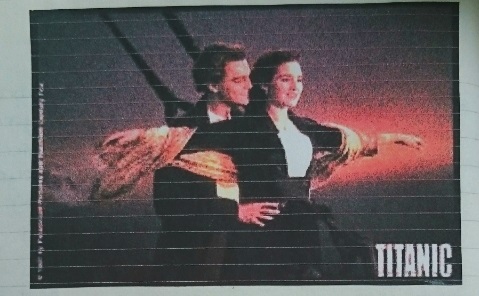 Also, when all the poorer people are partying, there’s a tune, like a jig, that my Uncle R plays with his band. I’m gonna have to borrow the soundtrack off Freda coz there’s this lovely but sad music that keeps playing.

According to Becky the Year 9, Dougie and his girlfriend might have fallen out. Becky even thought they might have split up. [Hallelujah!] Becky also said it was his birthday today but I’m not so sure.

Hold on, I’ll check in my previous diary. [Where I kept all my stalker notes.]

Dougie’s got a new coat. It’s bright red and I can’t get used to it!

I’m starting to like Ferny now. I wonder how long that’ll last.