Saturday 21st Jake came round today and apologised again for last night. He kept saying, “I love you” too! 🙂 We took Mollie for a walk up the back of The Crow cos we can’t go round the fields cos if foot and mouth. He said, “You’re the best” and hugged me lots and told me I’m his best friend too and he doesn’t know what he’d do without me. 🙂 I think he’s my best friend too and I’d be pretty unhappy without him.

I found out some horrible things today. Mum told me that Dad shot some of our hens cos they kept fighting, our little black hen (Titch) got eaten by a fox while she was protecting her nest and, the worst of all, my duck (Squeak) got killed on the road! She was apparently flowing the lad from next door and got hit 😦 He cried!

I got very upset when I found that out. I wasn’t very old when I had her (about 8 years old) but I loved her. Next door found her as a duckling but couldn’t keep her cos they had Sheba the cat. So they gave her to us. I adopted her and she thought I was her mum! She always followed me around and sat under my jumper. She ate sloppy Weetabix and once got drunk when Dad left alcohol out to kill slugs… which she ate!

Apparently it happened when we were in Scotland. She used to go over and talk (quack!) to the man across the road and that’s where they think she was off to. It made me cry a lot today cos they’d always told me she flew away and was probably swimming around on the pond at the garden centre. Mum said she’s buried in the garden somewhere.

Connor, Abby, Jake and I ended up in Knutsford this evening. We went in search of a pool table, had one game in The Railway before going to the Mangoletsi place where Connor got his car from. We left pretty fast when he heard “PLEASE LEAVE IMMEDIATELY” over some speakers! They must’ve have thought we were nicking cars or something!!

We then drove past Hugo’s house and I shone my torch on it but we now know there was no-one in cos we saw him and his family walking down the road. Connor reversed quickly and they gave us a funny look so Jake hid and I shined my torch at Hugo! Ha ha ha!!!

I was informed on Friday that the date of this diary entry is the day Meg from charliiandmeg was born. Happy sort-of birthday to Meg! (…Who may well be the reincarnation of my hamster.)

Wednesday 26th Tizzy my hamster has died. I was expecting it though coz she was pretty old for a hamster and she has been very sleepy recently and shaky if she got up. I think she must have just died in her sleep of old age. I’m gonna miss her. My room will be so quiet at night without her rustling about in the corner. I’ll have to bury her tomorrow.

I think Emma fancies Ferny. That’s not good. The way she’s been recently, she won’t care about anyone else (me) and will probably just go after him, flirting her way along until she finally gets him. Knowing my luck she’ll probably be successful.

We were just sat here in my room, she was on my inflatable chair and I was sat on the floor, expecting it to burst any second under her weight from seeing the way it was bulging, and she just suddenly came out with, “I’ve just had a disturbing thought.”

Of course, she wanted me to ask what and I did. Then she said summit like, “You won’t like it very much.” I could see she wanted to tell me and I wanted to know. I guessed it’d be Ferny and she said, “You’ll have to stop talking about him, I’m starting to fancy him.”

I hope she was winding me up but I wouldn’t put it past her to be serious coz she’s said before whilst going out with Freddie that she could fancy Ferny coz he has a sexy squint. Now there’s nothing to stop her trying to get him coz she’s broken up with Freddie.

She’ll probably say she was winding me up if she realises I’m annoyed. She may well have been but, like I said before, I wouldn’t put it past her to be serious. She wouldn’t have said it if she didn’t want to let me know.

Even if she doesn’t like him now, what she’s said and what I’ve been saying about him might get her thinking about him and she might decide she does like him after all. She doesn’t actually like anyone else in school other that Charlie and she’s convinced herself he hates her so she’ll probably try not to like him now.

Wednesday 10th I have had such a bad day today. The worst thing was that our cat, Cleo, died. It’s horrible. I keep expecting her to walk in, stare at my hamster and rub round my legs but she won’t ever do that again. She was such a beautiful cat, an Abyssinian [We think. She was a rescue so we had no proof.] and everyone said she was really pretty. She was only about 5. 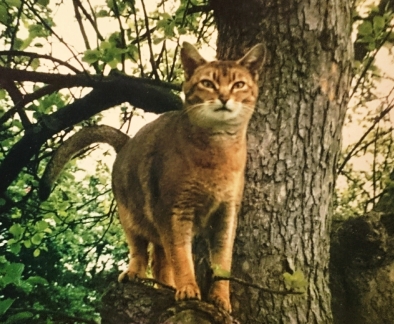 It’s so unfair and it’s such a shock. It was all so unexpected coz we knew she wasn’t too good last night but after school today she was much worse and was having real trouble breathing. Mum rushed her to the vet and I hoped so much that it wouldn’t be the last time I saw her alive.

Unfortunately it was. The vet said she had fluid on her lungs which he said was most likely a traumatic injury, probably a car. We were meant to phone back tomorrow lunch to see the results of tests and x-rays but they rang us and said she had just laid down and died. Dad collected her and brought her home. She just looks asleep. I don’t really cry much but this is really upsetting.

I want to change the subject before it gets me upset again but nowt good’s happened today.

I didn’t get the vet work experience placement either. Mr W told me to come and see him at lunch coz there was a problem. I went and found out that Megan Quinn and I got put down for the same placement and they could only take one of us. He tossed a coin and Megan got it. I’m not that bothered about the placement, it’s just coz she got it (I hate her) and it’s really close to the time when we have to go.

Ralph, Freddie, Emma and I did a 4-way call tonight. He still likes me and asked me out. I didn’t answer. Again. I want to go out with him but not now coz I’ll hardly see him after the 3 weeks left in school. Now I’ve regretted telling Emma and Freddie this coz they’re gonna make me (well, they can try) tell Ralph this myself to his face.

Now I’ve thought about it though, I might as well just go out with him [OH MY GOD, TESSA!! Make up your (my?) mind!] coz I think he’ll have gone off me by September (they don’t) and I don’t think I’ll get many more chances, if any. I’ll have to see how I feel tomorrow. 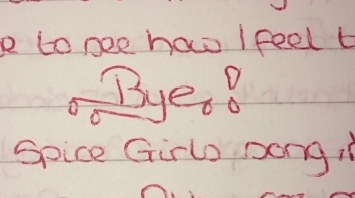 P.S. That new Spice Girls song, Viva (or summit), really reminds me of Cleo coz Mum told us whilst it was playing.

Tuesday 28th I found this in my pocket today:- 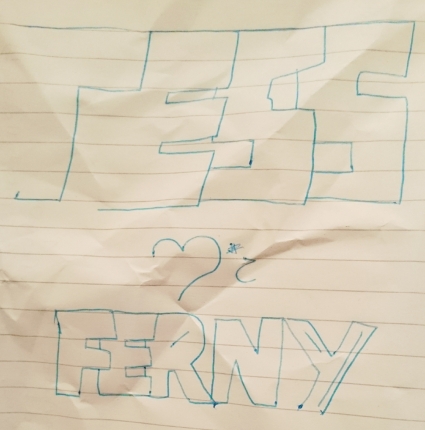 I nearly gave it to Rach to put her chuddy in. It’s a good job I read it first! Bella Jameson did it in Art I think. I must have grabbed it off her before someone else did.

I had a shock (but a nice one) when Dad came back from walking Mollie. He was stood by the front door with his hands cupped against his chest. I could hear a bird but thought it was something outside. Whatever was cheeping was really close so I went over to Dad and he opened his hands to reveal a tiny duckling.

He said it had been wandering about the lane on its own and Mollie had it in her mouth. It was okay so he waited round to see if he could see the mother but he couldn’t so he came home with it in his pocket. It’s lovely and flutters about everywhere.

I love ducks. I used to have one called Squeak from a duckling when I was younger but she flew away. [See note at the end of this post regarding Squeak ‘flying away’.] She thought I was her mother.

It’s a bit different with this one though coz we have a dog and a cat now which makes it a bit difficult. It’ll have to stay overnight and Mum’ll take it to her school tomorrow coz one of the kid’s parents has a farm.

[Er, yeah… Squeak didn’t fly away. I’d reached the age of about 18 in blissful ignorance and then my Mum told me the cold, hard truth. We were having a lovely walk by the river near our house. I admired the ducks swimming about and mused out loud, “I wonder if any of them are Squeak’s grandchildren”.

No. No they hadn’t told me. Tragedy struck while we were on holiday one summer. Squeak thought she was human and decided to pop over the road for a chat to one of the neighbours. She failed to stop, look and listen and ‘flew away’ straight in front of a lorry.

I cried. A lot. I loved her! She spent years following me round the garden and happily cheeping away under my jumper in the house. She cleared the veg patch of slugs (of which her favourites were the beer-soaked ones in the dishes under the beans). She entertained my friends. She scared my sister off. She’s the reason I’m still able to resist the temptation of crispy shredded duck at a Chinese buffet.

Oh, I’m going to have to go and have a little cry now.