Saturday 21st Jake came round today and apologised again for last night. He kept saying, “I love you” too! 🙂 We took Mollie for a walk up the back of The Crow cos we can’t go round the fields cos if foot and mouth. He said, “You’re the best” and hugged me lots and told me I’m his best friend too and he doesn’t know what he’d do without me. 🙂 I think he’s my best friend too and I’d be pretty unhappy without him.

I found out some horrible things today. Mum told me that Dad shot some of our hens cos they kept fighting, our little black hen (Titch) got eaten by a fox while she was protecting her nest and, the worst of all, my duck (Squeak) got killed on the road! She was apparently flowing the lad from next door and got hit 😦 He cried! 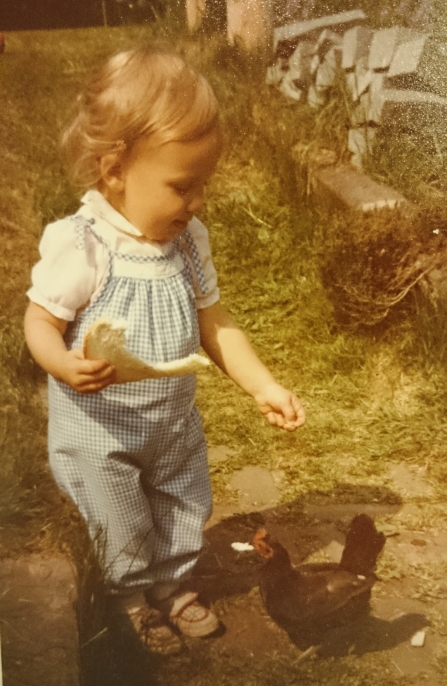 I got very upset when I found that out. I wasn’t very old when I had her (about 8 years old) but I loved her. Next door found her as a duckling but couldn’t keep her cos they had Sheba the cat. So they gave her to us. I adopted her and she thought I was her mum! She always followed me around and sat under my jumper. She ate sloppy Weetabix and once got drunk when Dad left alcohol out to kill slugs… which she ate!

Apparently it happened when we were in Scotland. She used to go over and talk (quack!) to the man across the road and that’s where they think she was off to. It made me cry a lot today cos they’d always told me she flew away and was probably swimming around on the pond at the garden centre. Mum said she’s buried in the garden somewhere.

Connor, Abby, Jake and I ended up in Knutsford this evening. We went in search of a pool table, had one game in The Railway before going to the Mangoletsi place where Connor got his car from. We left pretty fast when he heard “PLEASE LEAVE IMMEDIATELY” over some speakers! They must’ve have thought we were nicking cars or something!!

We then drove past Hugo’s house and I shone my torch on it but we now know there was no-one in cos we saw him and his family walking down the road. Connor reversed quickly and they gave us a funny look so Jake hid and I shined my torch at Hugo! Ha ha ha!!!

Saturday 29th As I always seem to do when I’m stuck at home and bored, I’ve been thinking. And as I have nothing to do, I’m writing in here.

I’ve just been listening to my Aqua album and (especially the song Lollipop) it reminds me of Austria because Rani was playing it all the time and we liked it.

It’s been about 6 months now since we went skiing and I still get this weird feeling in me when I remember the holiday. It’s a nice but sad feeling coz that was the best holiday I’ve ever been on (despite the injury to my knee) and I didn’t want it to end.

Then when I remember Austria, I think of Ferny coz I was getting on so well with him there, especially towards the end of the holiday. I keep remembering things he said and did which suggested he liked me but, according to his mates, he was obsessed with bloody Petra. [She was his ski instructor. He loved her so I hated her.]

There are 2 other times too when I thought it was possible Ferny could’ve liked me. When we went to see Jackie Brown and on Sports Day. It’s confusing though coz Ralph and Freddie reckon he only likes older women and Petra.

Oh, I dunno. He probably doesn’t like me coz in school he usually ignores me. I’d be better off not fancying him but I really can’t help it. I’ve got no chance with him so I may as well just forget him. I’m not going to, I’m just saying I may as well coz it’s totally pointless liking him coz it’s very unlikely I’ll ever get anywhere.

I’m sure he was flirting with me and being really nice in Austria etc. but it could’ve been my imagination and him being polite.

I’ve got my rollerblades… finally. They’re pretty good but I’m not really.

I’ve got to go to this stupid 25th wedding anniversary party thing of Emma’s parents tonight. I don’t really want to go. I know I’m boring but the rest of my family’ll be there and Abby’s gonna be following me round all the time and Emma’s got all these out-of-school friends like Suzanna that I don’t know very well. Plus Ralph’s gonna be there and everyone’ll get pissed.

I don’t wanna go AT ALL!