Tuesday 30th Alright? It’s been a horrid day today weather-wise. It’s been chucking it down all day.

Charlie Wilson has got a girlfriend. [I’ll have been secretly heartbroken.] Not in our school which is why he doesn’t have guitar lessons anymore so he can see her, poor girl. But then Mr P told us this so it might not be true.

Anyway, Charlie’s set up a fan club and I’m his manager! Emma is the first (and only) member. Charlie doesn’t know about this yet but I have suggested it to him before.

Freda, Olivia and Lindsey Bullman (she’s a complete bitch and looks like a horse) have upset Cat over something about an English mark and they made her cry. I thought she was being a bit soft but then I wasn’t there when this all happened because Lizzie and I went out at lunch. 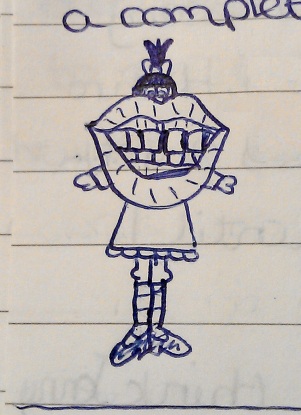 [Lindsey Bullman at her finest.]

I was talking to that Paul (PLD14) on the internet again, you know, the one from our school. He reckons he’s 17 now and in 2nd Year of college. It’s getting really confusing!

Dad’s gone to another Bolton match tonight. I’m not sure who they’re playing though.

Tuesday 23rd There was a mouse in our Science lab this morning. It was a wild one just running round the floor during a Physics test. I think someone put it out at break though.

Mr B (P.E. teacher) is really pissing me off. He keeps asking me questions and calling me Teresa. [A common mistake that I was probably too shy to correct. After correcting another teacher once, she said, “Well, Teresa must be the name on your birth certificate”. Er… nope.] He usually uses Jez or Daisy as examples too.

Mr P was on telly last night on ‘Here + Now’ about his brass band that’s turned acid. He didn’t actually say anything though.

Every lad in the school is in love with Lucy’s German girl. I’m just amazed she can breathe with all the make-up she wears! [Coming over here for A WEEK! Wearing MAKE-UP! Making ALL THE BOYS fall in LOVE with them! To that, mega-jealous teen me said NEIN DANKE!]

Bolton have beaten Spurs 1-0. Nice one, Bolton! How humiliated Adam’ll be!

I was talking to someone from our school on the internet tonight. I’m not sure who he is but he says he’s called Paul, he’s got a girlfriend called Caroline, he’s 15 (Year 11) and lives near Warrington. We won’t tell him who we are but we said we know someone who fancies Charlie Wilson. That was probably stupid coz if he asks Charlie who fancies him, he’s bound to say Emma and Emma knows I’ve got the internet. Our screen name gives it away a bit too.

I was stuck on my own in Art today coz Bella Jameson wasn’t in. I hate it when that happens.

At lunch, Charlie Wilson was sat on a bench by me and my mates. I don’t know how anyone could fancy him. [Whatevs.] He’s such a weedy looking lad and he perches on the back of benches like some sort of bird! I was just looking in his direction and he smiled at me so I smiled back. I think when he smiles is the only time he has the potential to look alright!

The German exchange students came today. Dougie’s not got one this year but Poppy has. She looked like a right tart on the photo. They all did. Even the lads!

There was a ski meeting at break today for the payment slip things to be given out. Emma was trying not to panic when Charlie Wilson wasn’t there at the beginning! He came eventually and stood there chewing the top of his coat and watching us.

P.E. (theory) was awful today. Rachael H and I were late coz of the meeting then Mr B kept asking me questions. I also kept catching Jez Greenhalgh looking at me.

P.S. I told Davis in Maths exactly what I think of American football. It’s not football at all. It’s just glorified rugby only with padding coz they’re all wimps and are scared of breaking something. Like a nail! [Just like Premiership footballers.] That’s just my [very uninformed – I’d never watched any] opinion though!