Tuesday 29th Ooh! Sarah phoned me this afternoon saying Michael went round to hers this morning to say goodbye before he went home. While he was there he told her he was thinking of getting a last minute fight to Portugal for a week in the summer. He then said, “Will you come with me?” to her and she said yes! She seems quite excited but she is a bit worried that it could be a bit awkward. I told her that it might not be so bad by then though cos they should see quite a bit of each other after exams.

She said he was showing her pictures of the villa his family have in Portugal and she says it’s really nice. He showed her piccys of his house too which she seemed pretty impressed with due to its size!

Aah, I think they make a really nice couple. I hope it lasts. I’d quite like one of my friends to have a proper boyfriend actually. Not only would it stop her whinging about not having one but maybe they’d be more understanding and not make me feel so guilty for having Jake. I mean, ok, he is drop dead gorgeous but I don’t like people being jealous and making me feel like I don’t deserve him, whether I do or not.

Jake also rang me this afternoon and I ended up in floods of tears on the end of the phone to him cos of the sheer dread of having a driving lesson today. I really shouldn’t have got so worked up about it but it was a bit of a disaster last week.

However, my lesson didn’t turn out too badly. I didn’t stall quite as much and he only complained about little things like not looking in my mirrors in the correct order. I mainly had to do reversing. I don’t think it was too bad but he still didn’t give me much positive feedback. Aarrgghh! Scary! That’s come from my Sports Studies! I actually know something! Yay!

I saw Jake briefly before he went to Venture Scouts (aww, sweet!) and he kept telling me I’m “yummy”! 🙂 Mmm!

I went to the Trafford Centre with my mum today in search of a dress for my leaving do for college. I found a skirt and top instead in Debenhams which match so it looks like a dress. They’re very nice. They’re just black but with sparkly bits on and the top’s very strappy and the skirt’s three quarter length. I’m pleased with them. 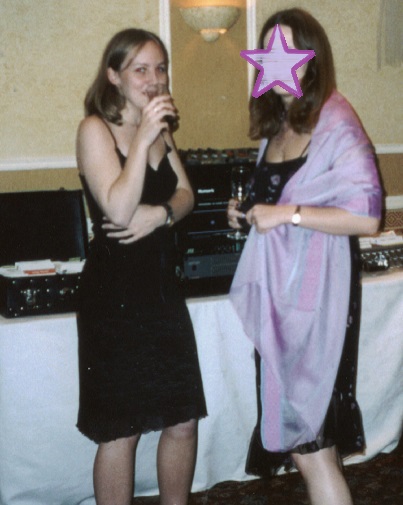 My mum is so top! I’ve been looking at a really nice vest top in the O’Neill shop in Manchester every time I’ve been in and I saw it today in Free Spirit. Mum saw me look at it, made me try it on and then bought it for me. Then when we were in Selfridges, I tried on some of the shorts in the Quiksilver section and she bought me them too. Then she spotted a really nice light pink three quarter length skirt on the next rack and made me try it on cos she liked it. I liked it too and she bought it for me! 🙂

I did feel a bit guilty cos she spent quite a lot of money on me but she says she doesn’t mind buying me clothes cos she buys Abby loads and my leaving do outfit wasn’t as expensive as we thought it’d be.

Well, I’m very pleased with all my new clothes. 🙂