Monday 28th Today was sooo good! Actually, it didn’t start off too well cos Karen demanded us to all be at her house for 9am so, because my parents were still in bed and there were no buses cos it’s a bank holiday, I had to walk there in the pouring rain with big heavy bottles of drinks in my bag. I gave up at the end of Crofters Lane and rang Sarah to see where she was. Luckily Michael had picked her up and was going to drive past me so I got a lift with them.

Then I got a phone call from Jake saying he was stuck at home and wouldn’t be able to go unless someone could pick him up. Nobody volunteered so he got pissed off with me (cos I was the one talking to him) which wasn’t very fair, saying that he always used to ferry them about when he had a car. That was a good point. Eventually it was decided that Michael would get Jake and Karen would go to Asda and get more food. Jake cheered up after that.

We were just about to get going when someone decided we needed spades (?!) so we took a detour to Cat’s house to get some and ended up with 2 huge garden spades.

Once we finally set off, the day began to improve. As we neared Ainsdale, the rain began to stop and eventually we saw some sunlight in the distance. Nine of us went in the end. There was me, Jake, Isaac, Denny, Michael, Sarah, Lizzie, Cat and Karen, and we all get on (even though Karen can be very annoying) so that probably helped it to be a good day.

When we finally arrived, we looked like we were on some sort of major expedition on the walk from the cars to the beach. We had 5 disposable barbecues, a little pavilion thing, rugs, a big groundsheet, bags of food and drink, towels, changes of clothes and loads more! We got some funny looks from golfers and dog walkers!

There was a weird yellow substance in all the puddles on the way to the beach. This worried me and Cat cos it looked a bit dodgy. We intended to get a sample and force some chemistry teacher at school to analyse it just in case we were in danger but nobody wanted to touch it. Oh well. Maybe we’re better off not knowing!

When we reached the sand dunes, we found a nice little hollow and put the groundsheet down and all the other stuff. We set up the pavilion/shelter thingy on a flatter bit and the barbecues away from anything flammable. We don’t think we were really allowed barbecues there but there was no-one about and the ground was damp and we were starving so we started lunch. Mmm, I love barbecues and it was really good having one on the beach! We all felt like we were on that Survivor programme that’s on ITV at the moment! (Well, except we weren’t voting people off the beach and doing loads of stupid tasks and things.)

After lunch, the weather warmed up a bit and we actually caught a glimpse of blue sky. So, we all decided to go to the sea for a paddle. However, when we got there, there were loads of dead things floating about, brown water and a layer of yellowish foam. I decided not to go in too far due to this but Lizzie, Isaac, Karen and Cat waded right out.

It was pretty windy and so the waves were quite big and the tide was coming in. I kept losing sight of the 4 of them and they were drifting along the beach. They eventually swam back and were soaking. Cat said she could feel currents under them and it was hard swimming back. Glad I didn’t go in. I’m also suspicious (due to the colour and consistency of the water) that a sewage pipe may not be too far away!

When we got back to our little camp thing, I started digging a big hole. Lizzie also dug a smaller hole in which she buried Karen’s trainers! Other people helped me dig and it ended up really deep. I was proud. My shoulders now hurt though! 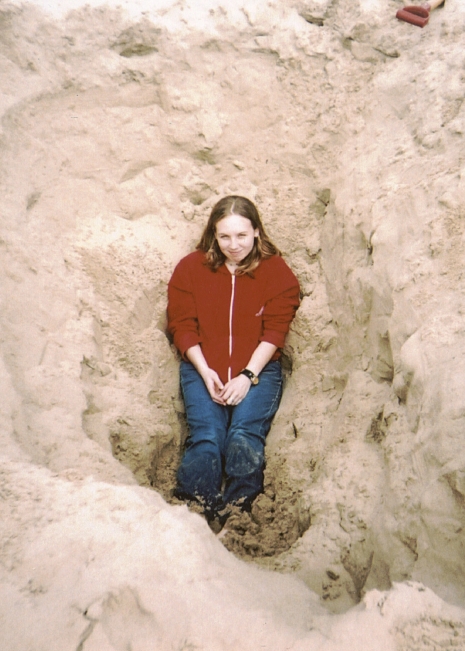 I’m sure we shouldn’t have done it cos I remember from the Biology field trip that the dunes are protected or something. Oops.

Karen had hung her bra up on the shelter thing (it wasn’t even wet) and was wandering around wearing only a towel and a cardigan with only one button done up, obviously trying to show off her body to the lads there. This annoyed the rest of us so when she wandered off somewhere, we hid her bra under a bucket (childish, I know!) and replaced it with Cat’s which was wet and about 3 times the size of Karen’s. She didn’t notice until she went to put it on! Then we all felt a bit mean (except Lizzie who though it was hilariously funny) so we replaced Cat’s bra with Karen’s again. She must’ve eventually noticed cos a while later it’d gone. Well, unless it blew away!

Lizzie began to bury Denny’s legs while he was trying to sunbathe but she ended up modelling him a giant penis out of sand which wrapped around his sand legs and went on for miles. We called it Denny’s Anaconda cos we decided that to catch females it would wrap itself around them etc! 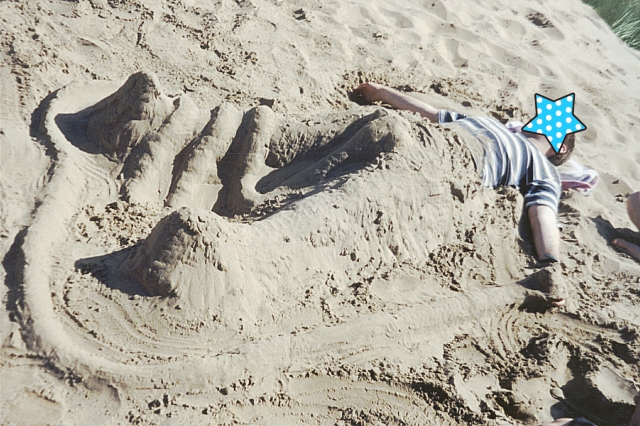 Cat then made Lizzie a cleavage out of sand (she hasn’t got one in real life) and put Cat’s bra over it. It looked quite good actually, in a realistic sort of way.

Meanwhile, Sarah and Michael had wandered down to the beach… alone. I went up on the sand dunes to have a quick look at how they were progressing and I was very pleased to see that they were holding hand. 🙂

I went and sat in my hole for a bit cos it was getting windy and I was getting a bit sand-blasted. I then began to dig a lemming hole (well, obviously they live in snow but I like lemmings and it seemed about the right size for one) which ended up the length of my arm. Then Jake started digging downwards and the tunnels met up and we could hold hands. It was really good!

Sarah snogged Michael when they were on the beach. She told me when we were having another barbecue for tea.

When it began to get cold and our eyes contained more sand than we could stand and our hair became matted and our clothes wouldn’t dry, we dug up Karen’s trainers and decided to go home.

We stopped off at some pub with a Wacky Warehouse to get a drink and make use of the toilets on the way back. Then in the car park, the 5 of us (me, Jake, Michael, Sarah and Cat) in Michael’s car were just putting stuff in the boot and Karen wouldn’t even wait for 2 mins. She just said, “You know where you’re going, don’t you?” and then zoomed off. We didn’t know where we were going at all and got lost somewhere round Bootle.

Eventually we found our way back to the East Lancs and stopped off at Mr L’s house on the way so we could see where he lives. The house was all dark so we turned round in his drive and I had a look over his garden fence. Just grass and a scrubby little path.

Wonder if his wife’s chucked him out. Hope so. Hope he’s having to sleep in a bin liner in a patch of brambles by the motorway so he has easy access to his potential new job at Little Chef! Ha ha ha!!! 🙂