I’ve been really, really tired all day. I think it must be this bug thing that Mum says is going round. It’s not like I didn’t get to sleep last night cos I did almost straight away.

I got a film developed today. It was all photos that I’ve been taking on Friday nights and stuff so there’s loads of good blackmail material! There are some really funny ones that I took when people were pissed e.g. Robbie Taylor. I have the photographic evidence that he’s been wearing Jake’s clothes!

[One of the first photos of Cat and I drunk in the loos… took the latest one a couple of weeks ago!]

[Lizzie with crisp bags in her hair.] 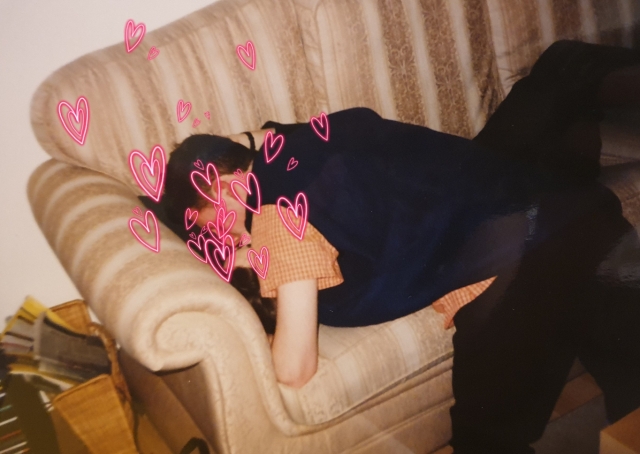 [A spot of snogging… I imagine this was some of the blackmail material.]

[Me and Cat, probably in a field on the way to the next pub.]

[Robbie on the floor in Jake’s clothes.]

Jake rang me at about 4:50pm tonight. He was telling me that the Abbie girl is the only one who hasn’t passed Level 1 of the course. I think that’s really shady and so does he but he said she hasn’t really improved much cos she doesn’t do what the instructors tell her to do. I feel sorry for her really.

He also told me more about his roommate saying we can go and stay in his parents’ chalet in Switzerland. I sort of mentioned the fact that everyone there except me would be ski instructors and he wouldn’t want to ski with me if all his mates were there. He got all bothered and hurt about me saying that and promised he wouldn’t do that cos he’d rather ski with me than them. Not that it’s necessarily going to happen anyway!

He’s still saying he wants to come home but is staying for the full 12 weeks. I really can’t wait to see him again! 🙂

I was joking about having to run off with a College 1 or a teacher to him but he told me to stop cos he doesn’t like the thought of it! I should’ve learned that by now!