Robbie apologised to me today for what he said last Friday and says he’s going to ignore me tomorrow night just in case he says anything else! I’ll forgive him! He’s alright really… but then I was never that annoyed with him in the 1st place cos there was nothing too bad written in the letter (he still shouldn’t have read it but I can’t honestly say I wouldn’t have done!) and it was his dad who said something in the 1st place.

Everyone else seems to know about his dad coming round and phoning me and started asking me what he’d said and stuff today.

Emma let out the truth about why Declan dumped Lizzie today. There was a group of us sat around talking about Declan and Kim, and then Emma said, “I don’t know how she can face speaking to you, Lizzie, after what she did.” We all turned to face Emma saying, “WHAT?!” Emma then had to tell us that Robbie told her that Kim and Declan had shared a bed on Friday and things happened between them. Lizzie then, quite understandably, got upset. We were all blaming Declan until today and, yeh, it was his fault but Kim knew he had a girlfriend but still didn’t say no.

Declan then came over to me and Sarah later and swore down that all he and Kim did was kiss. Even so, it’s still not fair.

Jake phoned at about 6pm tonight. He was sure it’s Friday today but I put him straight! His email really confused me when I read it today cos he seemed to think I might be going out. Poor lad, he’d got all confused too! He didn’t have much to tell me so I updated him on the Lizzie and Declan situation and stuff!

Emma’s dyed her hair and now looks like a zebra/skunk! She’s got really blonde bits and black bits too! I didn’t like it at first but now I’ve got used to it, I think it looks quite good! 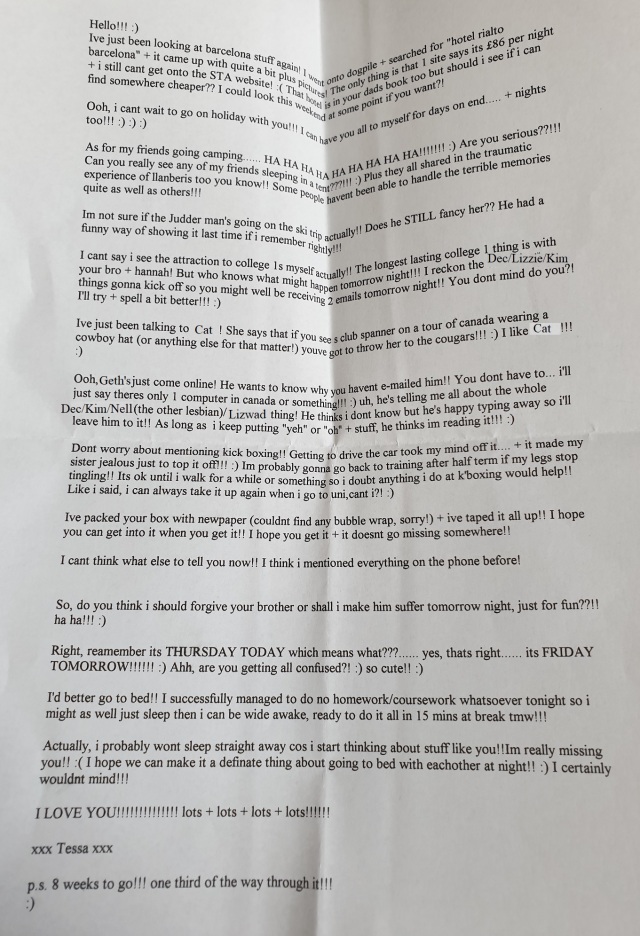