I spent most of today worrying a lot cos Jake said on the phone last night that he’d try and e-mail me last night when he got in from skiing but he didn’t. Then at 4:00pm (the time when he said he’d try to ring me), he didn’t phone so that made me worry even more. I couldn’t stop crying and thinking what the hell I’d do if something happened to him.

It was pathetic – I couldn’t eat or concentrate and I didn’t know what to do with myself. I’d have felt better if I’d have known I could contact him if I needed to but I can’t.

So, I’d just convinced myself that he was either dead, in a mood cos I hung up so quickly yesterday or in a hospital somewhere, when he rang. I heard my mum say, “Thank God you’ve phoned!” so I knew who it was.

I can’t go on like this for 3 months. If he doesn’t ring or something, I’ll be on the verge of madness through worrying. It’s an awful feeling not knowing but I think the feeling of helplessness cos he’s so far away made me worse. It really worried me, the state I got myself into. I just couldn’t stay calm.

I was so relieved to hear his voice that all the anger I’d had before I picked up the phone (cos he left me worrying like that) went away. It was about 5:30pm our time/10:30am his time so he’d just got up.

He told me the computers in the hotel weren’t working or something but he knew there were other places he could use so he’d e-mail me later. He said that Rob that he’s sharing a room with has got a girlfriend too so they went to some English pub last night. He then said that all the girls seem to have found lads.

One of the lads there knows who Jake is because he’s a friend of Hugo Pratt. Scary! Jake said he lost his orange glasses in the snow when he was skiing yesterday and that he didn’t ring me sooner cos his alarm didn’t go off to wake him up. He also said it’s -15oC there now. I didn’t want him to get off the phone but he had to get the last bus to the ski place or he couldn’t go skiing.

I checked my e-mail before I went to bed tonight and I was very pleased to see he’d sent me this! → 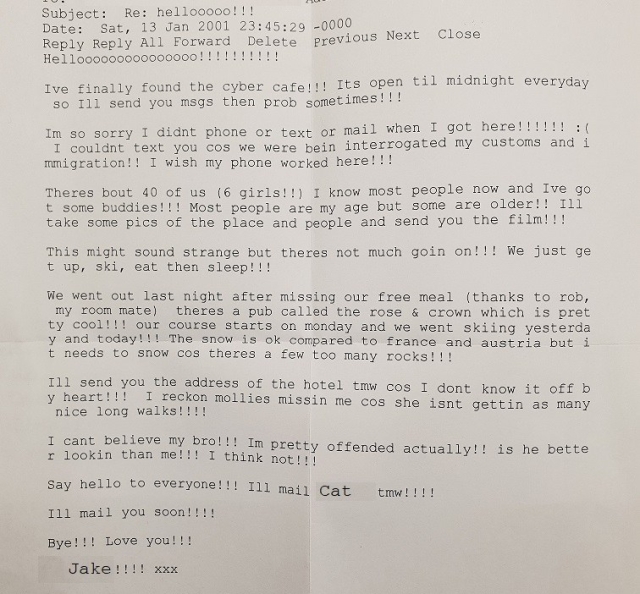 It didn’t actually say much and didn’t sound like one he’d send normally so I guessed he’d had someone with him. I sent him one back anyway.

Then when I was in bed before I before, I just got a missed call on my phone but no number came up when I checked. Then I had a call from the voicemail service saying I had a new message. It was Jake’s voice saying he’d e-mailed me but someone had been with him so he didn’t want to write anything too personal cos there was someone else there reading it. He said he’d try and send me another one later and that he loved me before saying bye and hanging up.

I was really annoyed I’d missed the call but at least I can keep his voice for 7 days! 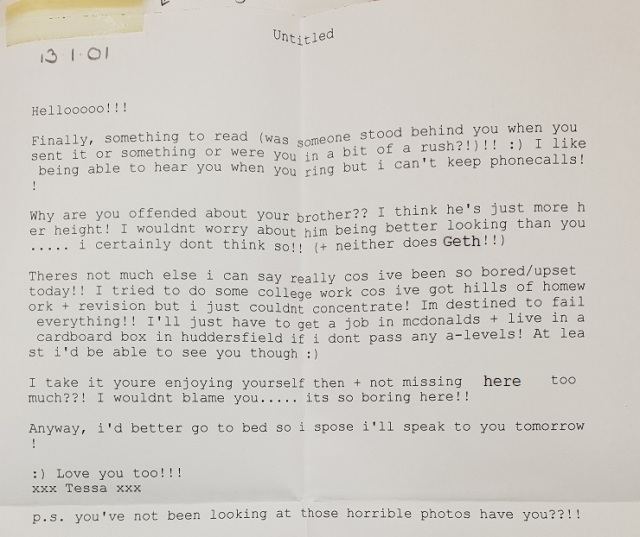 Enjoy this sunset with me and my windswept mane before the onslaught of seabird photos over the next few days. If you don't like puffins, consider this your warning to unfollow me... and good riddance to anyone that doesn't like puffins anyway 👋