Tuesday 29th I went round to Sarah’s again today to do some more coursework. Jake phoned again and we had another minor falling out cos he told me that he’d been informed that on the last night of cruises, everyone tends to throw themselves at everyone else in one last desperate attempt to get a snog or whatever out of the holiday. He made it sound like he intended on joining in!

So I “accidentally” cut my phone off (i.e. hung up) and then didn’t answer when he rang back and then wished I had once I’d calmed down and ended up sending him an apology for over reacting! He sent me an apology back too. 🙂

I got this postcard off him this morning. → 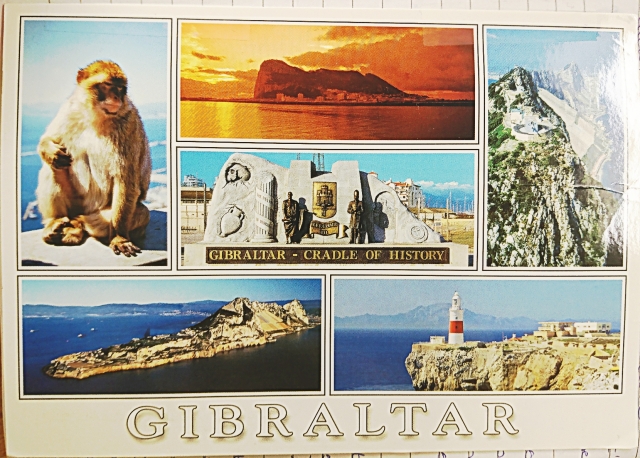 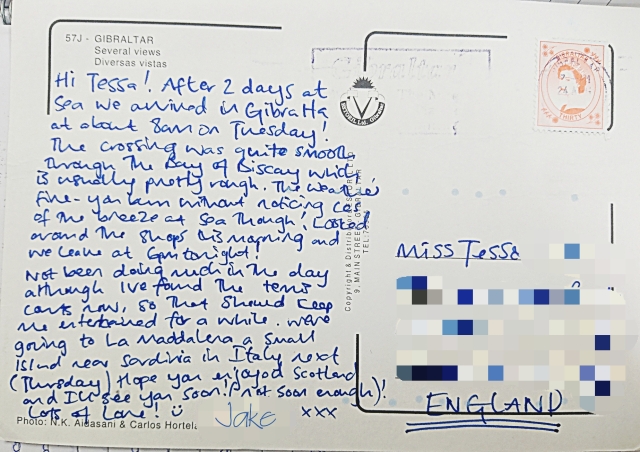 It’s slightly more impressive than the one I sent him from Wick!

It was Hayley’s birthday so tonight. She got some free tickets from Mr Smith’s in Warrington so Sarah, Hayley (obviously!), Georgia, Chloe and I went. Maz also came cos Hayley said Sarah could invite him.

We started off in Edison’s which was absolutely packed but Hayley still managed to spot Andy (her ex type thing – I was never sure what went on in the 1st place!) who she’s totally obsessed with. So, she dragged Chloe off to find him with her. That pissed Georgia off cos as soon as Chloe was there, Georgia got totally dropped by Hayley. I know how Georgia feels sort of cos Hayley did exactly the same with me and Sarah for Georgia, the difference bring that Sarah and I weren’t that bothered cos we don’t like Hayley all that much anymore!

Hayley had told us that she’d meet us outside at 10:30pm but when we went out, she didn’t turn up for a good 10 minutes so we all got pissed off cos Hayley had the tickets and if we weren’t in Smith’s by 11pm then we had to pay.

Eventually, Hayley and Chloe turned up and I had to put up with Hayley going on and on about what Andy did when he saw her, which wasn’t much! She also decided she smoked too but we all reckoned it was an attempt to impress Chloe as well as look old. Silly cow! She didn’t impress the rest of us cos it was disgusting!

We got into Smith’s easily enough. Abby and Connor were in there but I’ve been told Mum doesn’t know so I’ve got to keep quiet. Ha ha!! Blackmail material!

It was quite busy in Smith’s too but it was really good! Georgia had quite a bit to drink and felt sick (but wasn’t) and got quite a bit of attention from us asking if she was okay. Then suddenly, Hayley also felt sick and announced she’d had too much to drink (she’d had a Taboo and lemonade and a Breezer or something!) and ran into a toilet cubicle and made some coughing noises and came out with watery eyes. I don’t think she’d really been sick, she’d just picked up on the fact Georgia got attention.

We had a dance and then Hayley spotted Andy again. Georgia and I got fed up of waiting for her to see him again so we wandered off to where it was a bit more lively. I kept getting my arse felt and blokes putting their hands on my waist but, other than that, it was better than being with misery guts Hayley!

When Georgia and I went to sit down again, Hayley was already there, very obviously interrupting Sarah and Maz from their snogging! Georgia and I just talked and had a giggle over some bloke’s dancing and pulling techniques and Hayley must have noticed. The next thing I knew, Hayley was dragging me off to the toilets telling me she was going to be sick again. There were more coughing noises, even though all she’d been drinking was water!

Later on, Sarah and I worked out that Hayley had probably dragged me away from Georgia (mid-conversation, may I add) cos she won’t want me and Georgia getting too friendly, just in case she gets left out and therefore less attention!

When we left and booked a taxi, Georgia and I saw Andy rolling round on the grass with some lad in a fight and then getting restrained by a policeman! It was really funny!

Then Hayley announced that it’s not fair cos she’s got no-one to “care” for her! I pointed out that most people haven’t right now and she turned round and said that I’ve got Jake and Sarah’s got Maz and that it isn’t fair. Why shouldn’t we have them? She was trying to make us feel guilty! Bitch!

I asked her why shouldn’t we have anyone and she promptly went off to be “sick” in the bushes. I turned round and I could see her looking at us. As soon as she saw me, she bent over and made throwing up noises. She did the same again when she saw me turn round a few minutes later.

All she needs to care for her is a hospital full of qualified people who know how to take care of headcases properly! She really does need help and I’m not the only one who thinks that. I know for a fact that Jake, Gethin and Sarah (at least) agree with me. Cat Elliot thinks she needs professional help too! Maz has only seen her a couple of times and Sarah said he reckons there’s something wrong with Hayley’s mind!

But, overall (minus Hayley!) it was a really good night and I really enjoyed myself! 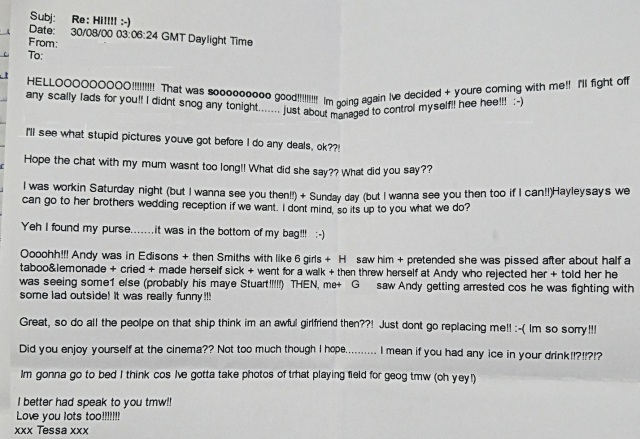