Wednesday 23rd We did end up coming home today. I wasn’t sure that we would cos of Grandma but we just left at about 11am rather than 6am so we could see how things were going for her.

We didn’t get chance to say goodbye to Rhian, Tom or Minnie cos by the time we’d woken up, they were already at school. It was awful saying goodbye to Auntie S cos she put on a brave face up until she said goodbye to Dad and then burst into tears. She was very worried about Grandma and Mum and Dad felt really guilty about leaving then.

We called in at the hospital on the way home. I thought I’d be okay and I was until we had to leave. She was much better this morning but seeing her sitting in the chair, all wrapped up in a blanket, made her look really small and old.

I think she got a bit upset at us leaving too and I kissed her on the cheek and had to stand behind Mum and not look at Grandma cos I could feel my eyes filling up. I tried to control it but as soon as I left the room I was in floods of tears. I couldn’t help it. I know it’s awful but I couldn’t stop thinking what if that’s the last time I see her.

Seeing Wick disappear into the distance when going home is always bad enough but this time was far worse. I’m crying even now thinking about Grandma. She scared us all so much!

When we reached Perth today though, Auntie S rang and told us Grandma’s back at home. I’m so glad! They apparently gave her the choice of staying in hospital for longer or going home but getting proper home help which I think she’s refused to have before now. She chose the 2nd option, obviously.

I’m home now too now which means I can get back to doing my coursework (oh joy!) again. 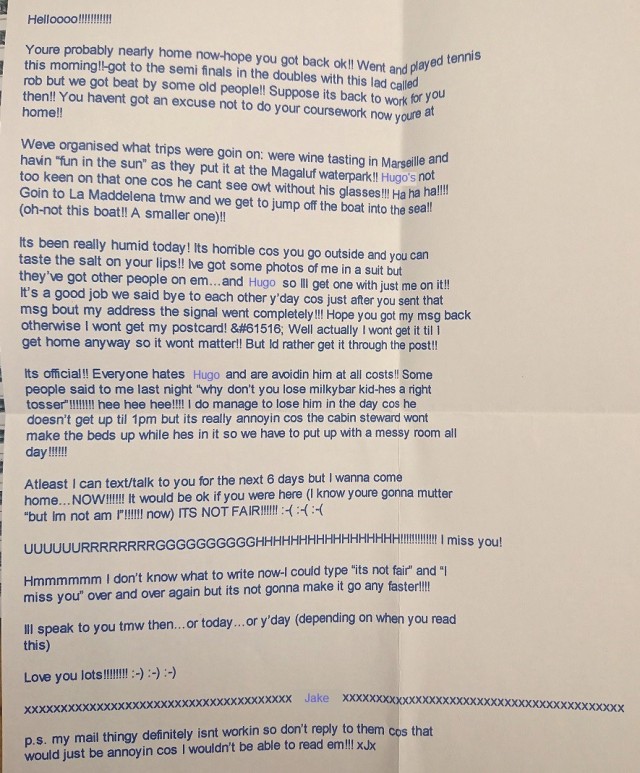 P.S. The e-mail at the top of the page is one I got from Jake today.