Thursday 3rd Jake and I got bored quite quickly today so we decided to get on a train and go somewhere. We only ended up going to Manchester though which wasn’t very exciting cos all we did was wander round and then go in the Starbucks there when it started raining. Once we got bored of Manchester, we just got on the train (after running for and failing to catch an earlier one!) and came home again, stopping off at McDonald’s for tea! 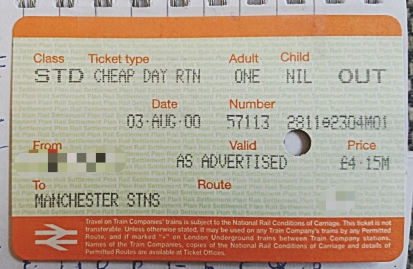 When we got back to mine, we were both a bit knackered so we just lay about listening to music and stuff. Jake told me he likes my legs too! He also had his hand in my pants but didn’t do owt.

His dad came to pick him up this evening and had been talking to my parents. He noticed a Puffin Book Club sticker which I’d put on Jake and he asked who’d stuck it on but before waiting for an answer he guessed it’d been me! I know cos I sent Jake a message later checking that he had guessed and he said, “RIGHT! OK! : ) HE GUESSED – I THINK HE HAS HIS SUSPICIONS NOW HE KNOWS YOU PAINT MY NAILS! : ) DON’T WORRY – HE JUST LAUGHED AT ME! OH AND HE THINKS YOU LOOK A LOT LIKE YOUR MUM! DON’T KNOW HOW THEY GOT ONTO THE TOPIC OF VEGETABLES THOUGH!? LOVE xJx”.