Tuesday 11th Cat’s alarm woke us up at 6:30 am so we could all have showers so I’ve been knackered all day! We had breakfast and then set off for the Millennium Dome for our concerts.

We went in through some back entrance and then we were allowed to look around before setting up for our first concert. I was with Cat most of the time and we agreed that the whole thing’s just plain weird! It’s just some of the sculptures and stuff that makes it so odd. It was the pointed foot on the body zone that kept us laughing though!

The first concert went really well. One of the sound guys put a microphone right by my flute which I didn’t like but all together it sounded good and we were being played on speakers all over the dome. Some guy who works there (he looked important) came and told us that they’ve seen a lot of bands play but we really stood out as being good and all the backstage staff had said we were nice to work with! Apparently they want us back! People were dancing to us and everything! 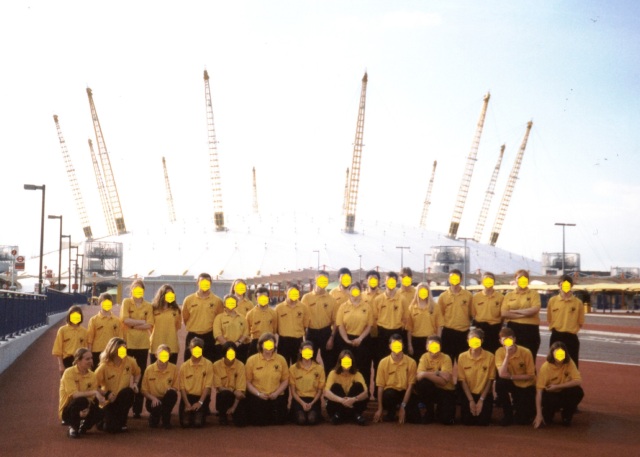 We all got a free McDonald’s for lunch and then went to watch the show they put on. The story line that they put up on the screen about ‘Skyboy’ and the other characters was a bit strange but the music and the dance etc. was really good. We had our second successful concert after it.

My camera stopped working so I bought this postcard from the shop instead. →

The place actually looks nice on there but in daylight it looks horrible! It looks like a manky old tent with cranes sticking out of it!!

I also bought couple of keyrings so Jake can have the free one cos the woman in the shop undercharged me!

Then later he sent me a message saying, “I’M LOOKING AT THE PHOTOS, LISTENING TO LONESTAR, SMELLING MY WATCH STRAP AND LOOKING AT MY NAIL! YOU MEAN SO MUCH TO ME! CAN’T STOP THINKING ABOUT YOU! LOVE YOU! x”.