Tuesday 27th I saw quite a bit of Jake today cos he had an exam this afternoon so he came in this morning to “revise”! I waited after college for his exam to end so I saw him then and all.

I’ve gained another photo of me and Jake from Hayley. → 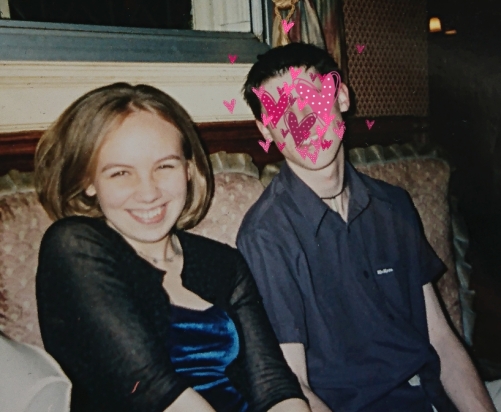 She took it when we were in The Dog on Sarah’s birthday and she thought it was quite good so she said I could have it. Jake wants a copy to take round Europe with him cos he says I’m nearly doing the face he likes me doing or something!

Hayley persuaded Jake and me to go to the Sports Club tonight with her, Georgia and Gethin so she could stalk her cricketer. He was there and said hi but he didn’t stop long. Hayley then asked Jake if he’d drive her up to see the cricketer’s house and he agreed but he couldn’t start the car because someone had done something to the spark plugs or whatever! We got going eventually and Jake was just about to miss Mowley Common Lane when Hayley pointed it out. We then skidded round the corner, leaving tyre marks on the road and an old man looking very shocked!

We drove to the chippy then and some rather large girl ran across the park. Hayley and Georgia were laughing very loudly and then Hayley said something like she should buy a bra! The car window was open and she must have heard that cos she have us the filthiest look!!

Then we went and sat on the park (but only after the girl had gone cos we were scared!) with the chips. We were joined by Charlie Wilson cos the Venture Scouts were at The Beech Tree pub. He started talking about their Europe trip so I stopped listening!

Jake’s sorted it out now so that he should be getting out Swing Band bus back to England with us after the Holland trip.

I had a couple of nice messages off him when I got home saying, “TONIGHT JUST SEEMED STRANGE – THE FACT THAT I’M GOING ACTUALLY HIT ME! I CAN’T EXPLAIN HOW MUCH I LOVE YOU AND HOW MUCH I’M GONNA MISS U! HOPE YOU KNOW THAT!…” and then, “TONIGHT WAS GOOD COS I SAW YOU – BUT THE FEELING INSIDE WHEN YOU CLOSE THAT DOOR AND I DRIVE OFF JUST CUTS ME UP! YEH I CAN C U AFTER COLLEGE ONE DAY! LOVE YOU! xJx”.

I then said how I’d end up staying in his car all night if I stayed with him longer and then I jokingly pointed out that he doesn’t do cars! He then told me that I deserve better than the back of a car!