Tuesday 23rd Hayley was still speaking to me this morning. It just went back to how it is normally is. Although, she was in floods of tears when she was talking to Georgia about something. It was probably about Andy so I just kept out of it cos I’m getting sick of her repeating herself when she talks about him!

I saw Jake today. There was no mention of his mum between us. He did seem a bit quiet which would be understandable but then I’m not sure if he’s just normally like that and if I was just more aware of it today now I know there could be a reason behind it.

I told my mum about his mum on the way to Grandma’s tonight. I’ve been dreading telling her cos I don’t want her worrying about how I might be affected and stuff but I knew I’d have to say something eventually anyway.

She started asking me about Jake and what he’s doing now he’s left college and stuff so I took the opportunity to tell her about his mum while we were on the subject of him. She was on the edge of crying when I told her, I could tell by her voice and I could see her eyes beginning to fill up. I found it hard not to cry again myself, especially when she said how I’ll have to do a lot of supporting.

She’s the 3rd person that’s said that. First it was Mrs K then Hugo and now her. I know though!! It’s easier said than done. I’m so worried about saying the wrong thing to him or making him feel worse about it all.

My mum just kept saying how awful it is, especially with a young family, and how awful it’s going to be for her husband. I just wanted to get out of the car cos I thought I was going to cry and didn’t want her to see me do that cos she’d start worrying about me, and she’s got enough to worry about with Grandma and stuff.

I’ve told mum not to say anything to anyone or ask anyone if they know about it and she said she won’t. 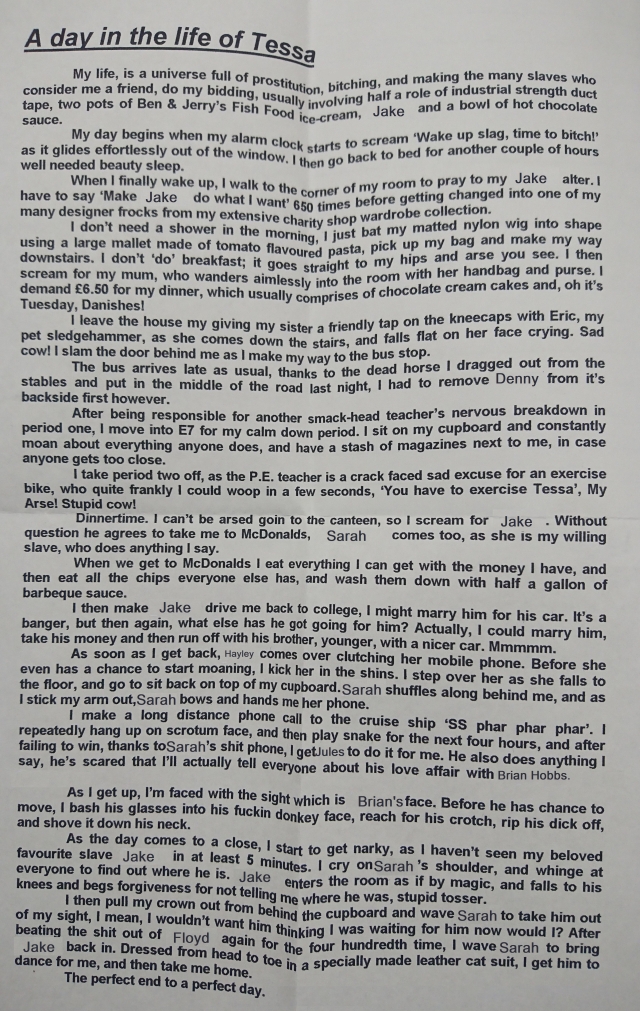 It’s quite funny in parts, although I could take offence to it! I won’t though cos I know it’s only a joke really! A few other people could find it insulting too actually! Oh well!