I went round to Hayley’s last night and ended up stopping over. We didn’t do much except watch TV and Titanic on video! 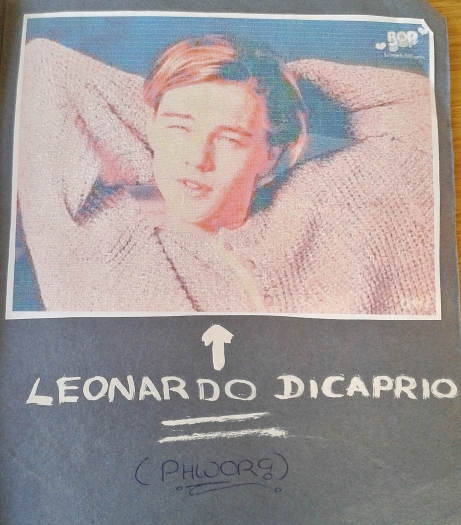 The main reason I liked Titanic.

I got quite a few nice messages from Jake. I sent him one asking what he was doing and he replied, “I’M IN BED LISTENING TO MUSIC! I HOPE YOU DON’T MIND BUT I’M USING YOUR FLEECE AS A COMFORT BLANKET! : ) IF I CLOSE MY EYES IT’S LIKE BEING WITH YOU! LOVE YOU! xJx”.

Watching Titanic made me go all soppy so I sent him a message back saying that I didn’t mind him using my fleece for that and then told him that there aren’t the words to put how much I love him or something and I got one back saying, “THAT DOESN’T MEAN YOU’RE GONNA STOP SENDING MSGS DOES IT?! YOU CAN EXPRESS YOUR LOVE IN OTHER WAYS WHEN WE ARE TOGETHER!! REALLY DO LOVE YOU SOOOO MUCH!!! : ) xJx”.

It was in the back on my mind that that message was a hint for us to take things further so I asked him what he meant by that. He told me, “I MEAN I CAN HOLD YOU CLOSE TO ME AND KISS YOU – WHEN WE ARE TOGETHER! DON’T KNOW WHAT I’D DO WITHOUT YOU OR MY PHONE!! I’M JUST GLAD WE FOUND EACH OTHER! LOVE xJx”.

I can’t remember what I said to that but the next message I got off him said, “JUST PROMISE ME THAT YOU’LL NEVER PINCH ME! COS I’M GOING TO WAKE UP FROM A REALLY NICE LONG DREAM! TICKLING IS OK BUT WATCH THOSE COLD HANDS!! LOVE YOU TOO! xJx”.

I had a phone call from Hugo Pratt too. He rang just after I’d got the first message off Jake. He started off just asking how I was and stuff then said he’d just spoken to Jake. He was saying how he’s really upset about his mum and how he’s been talking to Hugo about what’s changed with her every day but he’s not said much to anyone else cos he tends to keep things bottled up. To be honest, I think I’d be like that too.

The Hugo said how Jake’s really upset now after “what’s been going on recently”. I didn’t have a clue what he was on about and Hugo said he just assumed I knew but he said he’d better not say anything other than it’s really not good at the moment with Jake’s mum.

He then changed the subject on coming down to our villages one Friday night but then it got back on to the previous topic when he said how it was difficult for him cos can’t stay with Jake at the moment due to recent events. He then asked how much Jake had actually told me. He sounded a bit surprised when I told him that he’d only mentioned it once to my face and once in a message after Mr S’s assembly and Claire’s party thing. I told Hugo that I have actually known about her being ill for ages and that what I did know, I’d actually found out from other people. He asked who but I didn’t tell him.

He eventually ended up telling me what’s happened. Apparently Jake’s mum’s gone into a hospice and Jake’s reluctant about going to see her because he doesn’t like seeing her like that. He said he was meant to go to see her yesterday morning but didn’t and then worked last night so he didn’t go then either.

Hugo was saying she’s gone really weak and can’t even talk much anymore cos she’s got so little energy or something. I was extremely close to tears when he was telling me all that. I just had no idea. He said she’s got about a month left, I think. It’s awful.

Before he went, Hugo made me promise not to tell Jake he phoned me and not to mention anything he’d told me to anyone, even Hayley. I didn’t tell Hayley but I mentioned it briefly to Abby when I got in this morning.

Although, Hayley (of course) immediately wanted to know what Hugo had been saying once I’d hung up. I said that he’d mentioned Jake’s mum not being too good cos Hayley knew that anyway. Actually, she told me that Jake had told her that he’s been taking his sister to the stables because his mum can’t drive her anymore. I don’t know if Hayley asks these things but she always seems to know more about everything than I do.

Anyway, I’m quite glad Hugo did ring really cos he’s answered a few questions that I didn’t want to ask, even if it did mean lack of sleep for me.

This morning, I sent Jake a message asking how he was and saying that Hayley said she’d been dreaming about going to Durham. I also asked how my fleece is! He replied, “I’M OK! WHY DID SHE GO TO DURHAM?? YOUR FLEECE IS FINE! – I’M TAKING GOOD CARE OF IT! (IT’S SOOO WARM!!) WISH YOU WERE IN IT THOUGH!! LOTS + LOTS OF LOVE!! xJx : )”.

I was on the internet for 3 hours tonight talking to Hugo! His screen name on AOL is HGPRTTUK. While he was chatting to me he was also on the phone to Jake for 2 hours! His phone bills must be huge!! Nothing of much interest came out of the conversation.

I also chatted to Rhian (my cousin) online and filled her in about Jake. She’s apparently seeing someone called Mack who’s a mate of Duncan’s. I’ve not idea who the Mack lad is!

Got a couple of messages off Jake tonight. I’d told him that I might have to go for a meal for my mum’s birthday next Saturday when I’m meant to be staying over at Sarah’s. I told him I’d do my best to get to Sarah’s though and asked about my fleece again! He said, “YOU BETTER DO YOUR BEST! : ) I CAN’T SLEEP WHEN WE ARE APART SO I’M NOT GOING TO WHEN I’M WITH YOU! ARE YOU PARANOID? YOUR LOVELY FLEECE IS JUST FINE!! LOVE xJx”.

I then told him I hoped that we wouldn’t just be awake at Sarah’s due to thinking about each other and he said, “OF COURSE IT WILL BE A DIFFERENT REASON FOR NOT SLEEPING! : ) MY MIND WILL BE THINKING ABOUT LOTS OF DIFFERENT THINGS – ALL INVOVING YOU!!! LOVE YOU TO BITS! xJx”. I’m not entirely sure what he meant by that but I have an idea!