Thursday 24th This was the best day of skiing so far!! I didn’t fall over once and we were bombing it down the mountain. Leather Steve said it was good to see me at the front with the lads.

In the morning, Robbie wanted a photo of me but I didn’t want him to take one because Jake would see it if it was bad. He tried again later saying, “But Jake’ll want one of you!”

We had a test in the afternoon lesson. I got the silver badge (we couldn’t get higher than that in our group).

I’ve decided that Ivor Ward on his snowboard is definitely pretty damn fine!

In the evening, with it being out last night, I got a bit pissed on Alex’s vodka (he didn’t know!) and I was in Mr L (Phwoar!!) and Mr C’s room with Cat, Katie and Janine. I was moaning about my hair and Mr L said it looks nice down cos it looks really natural. I’m going to wear it down more often. He also likes my Fila fleece. Well, I want his blue Quiksilver one. We should’ve swapped!

The evening was awful. Robbie’s mates nicked his hair gel or something and he must have got annoyed because, at tea, Aiden Fallon said to him, “It’s just hair gel, it’s not like your mum’s died or anything!” unknowing of the actual situation. Robbie got upset and Mrs K came and spoke to me and went on about how I’ll have to do a lot of supporting and stuff. This made me think and then I couldn’t stop crying.

It’s really worried me now. It’s also the fact that Jake’s not even told me but he’s told Hayley. I don’t know what to think of that. He probably thinks I’d be scared off. I don’t think he realises that I know.

Happy hour in some pub but I still wasn’t very happy. I was telling Ivor about the Maggotboy story because he knows Aled but Declan Churchill said it looked like I was chatting him up and vice versa. If I was single, that could quite possibly have been the case but I’m not so it wasn’t.

I was still pissed off at the disco. This was the ticket we needed to get in → 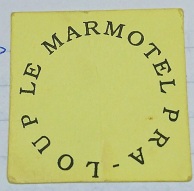 I phoned Jake before all the Robbie stuff at tea happened. He said he still had a sore throat and that it was glandular fever which he caught off a hooker! He’d better have been joking!! He also mentioned something about me seducing Aled. Worried!