Saturday 12th I had quite a good night last night but the daytime was a bit on the stressful side of things. As soon as I arrived in college in the morning, Sarah ran up to me and said she had some inside information on Jake. She was talking to his mate, Bhakti, and she’d told Sarah that Jake was going out to get me a Valentine’s present. She also asked him what he’d want and he’d said something which was sentimental and not Lynx or something bought just cos I had to get him something.

That seriously panicked me! All I’d got him was a card so Sarah and I decided to go into Warrington there and then. This meant we ended up skiving the whole day. I didn’t feel too great about doing it but there was no other time to buy him a present.

We trekked around the shops for ages before I finally decided on something. I’d already got him a card which says, “I was going to fill this card with kisses…” on the outside and then, “… but I’d rather give them to you personally!” on the inside. I then found some Purple Ronnie heart-shaped chocolates in New Look with a poem on the box saying:

At one point in the day, I rang Cat to ask her opinion on what to get him She told me that he’d been sat in the common room at break waiting for me but nobody bothered to tell him. So I sent him a text saying, “HELLO! CAT SAID U WERE LOOKING 4 ME AT BREAK. I’M NOT ACTUALLY IN COLLEGE. SORRY! I’M IN TOWN INSTEAD (BUT SSSHH!). HAVE U GOT BHAKTI’S NUMBER? SARAH NEEDS IT. LUV TESS”.

When we arrived back at college, Jake was sat in our common room talking to Hayley, Bhakti, Freda and Floyd. Bhakti had told Sarah on the phone earlier that, for a present for me, he was considering something white, fluffy and sentimental with perfume. Should I be worried??!

Hayley told me later that he spent 45 minutes choosing a card for me and even if we hadn’t have been together he was going to send me a card anyway except he didn’t know my address cos he couldn’t find my dad’s initials on the electoral role or something.

I spoke to him myself briefly and he told me he was bringing a mate from Knutsford out with him that night and he’s a bit posh and we had to look after him.

The next time I saw Jake was at 8:30 last night at The Dog. He said he’d been there for about 10 minutes but had seen me, Sarah and Hayley stood at the bus stop so he knew we were on our way. His mate, Hugo Pratt, was okay personality-wise but, in looks, he reminded me of Big Paul (which isn’t really good!) but Sarah took a liking to him and that liking was returned.

Some woman came round selling carnations for £1.50 (rip off!) so Jake bought me one which I thought was really sweet. He was telling me that he and Hugo had been best mates for about 4 years and they met through their dad’s working together. Hugo’s loaded so I didn’t have to pay for a single drink all night!

When Jake went off to the toilet, I asked Hugo why the hell he liked me when he could have anyone, almost. Hugo said that Jake told him I was exactly his type so I was perfect for him. Hayley questioned Jake himself on the same thing when I went to the toilet and he said he thought I was really pretty and I have a good personality. I’m so flattered!

I snogged Jake at the bus stop on our way to The Plough. There were loads of people about, including Abby, but I just didn’t care! I like him sooo much!

Hayley ended up pretty much on her own in The Plough because Sarah and Hugo ended up with their tongues down each other’s throats nearly all night. Jake and I managed to control ourselves (a bit!) and spent ages talking. I found out loads.

Later on, we got onto the subject of liking each other. I asked him how long he’d actually liked me for and he said that, ages ago at LA Bowl, some of my mates had said I fancied him and stuff and he told me he felt really pleased about it and then disappointed because they later told him they were joking, and it went on from there. The thing is, I did actually like him, I just didn’t admit it.

Around the same time as we talked about that, someone came over and asked what was actually going on between us. I didn’t really know so I asked him and he said, “Well… I really, really like you…” then he paused for a few seconds before saying, “Will you go out with me?” I did hesitate though and said yes straight away. So we’re officially a couple! 🙂

When we had to go home, we were just snogging goodbye and his chewing gum fell down my top. I only found it when I got him so I’ve stuck it under my desk for safe keeping! Disgusting, I know! 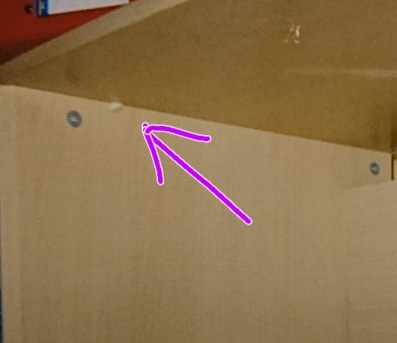 [It’s not there anymore (I checked) but for some reason, I did take a photo of it at the time. Weirdo.]

I sent him another one saying, “SARAH’S GONNA HAVE A SERIOUS HANGOVER IN THE MORNING BUT SHE SAYS HE’S WORTH IT! HMMM! SHE’S JUST GOT HIS MSG + SHE’S HAPPY! I ENJOYED IT 2. NIGHT NIGHT! LOVE TESS x”. That was it for the night.

Then this morning, Hugo phoned Sarah. He told her that Jake really liked me and had never felt like this about anyone before! 🙂 🙂 🙂 🙂 I’m so happy!

This evening, I went to LA Bowl with a few of my mates. I saw Spike from 911 again and Robbie Taylor.

I then got 2 back. One said, “NO WE DIDN’T SEE SARAH BUT HE’S MENTIONED HER NAME SO MUCH HE’LL BE SAYING IT IN HIS SLEEP! BHAKTI HAS SOMETHING FOR SARAH FOM HIM! DOES SHE REALLY LIKE HIM?????” + the other said, “IF SHE DOESN’T I THINK SHE MAY HAVE A PROBLEM!! HE’S ALREADY TRYING TO WORK OUT WHEN HE’LL SEE HER AGAIN! YES THERE’S PLENTY OF PEOPLE I KNOW IN KNUTSFORD! LOVE JAKE”.

My reply was, “I THINK SHE DOES LIKE HIM… A LOT! SHE WOULDN’T SHUT UP ABOUT HIM LAST NIGHT OR THIS MORNING (I NEED SLEEP!) + SHE’S NOT MENTIONED GETHIN ONCE! R THEY GOING OUT?”

The next message from him said, “I’M TALKING TO HUGO AT THE MOMENT – HE SAYS HE WOULD LIKE US ALL TO GO OUT FOR DINNER TOGETHER, HE IS REALLY EXCITED ABOUT SEEING HER AGAIN!!” I can’t go out for dinner!!! That’d be awful! I hate eating in front of people I fancy.

After I saw Robbie, I thought I’d better explain why I was at bowling so I texted him saying, “I CAN C YOUR BROTHER! I’VE JUST BEEN DRAGGED 2 LA BOWL (HELP!!) BY FLOYD COZ HE’S GUTTED ABOUT SARAH + HUGO + SAYS HE NEEDS TO TALK 2 ME. WHAT SO I SAY??! x”.

I told Floyd about it earlier today and received a text back from him saying, “HI TESS. ONLY JUST SEEN U’RE MESSAGE. HEARTBROKEN COULD NOT COMPARE 2 WHAT I’M FEELING NOW! THANK U 4 TELLING ME B4 EVERYONE ELSE TELLS ME! FLOYD”. Poor lad.

My next Jake message said, “I DON’T WANT TO GET INVOLVED IN ANYTHING LIKE THIS BUT HUGO IS GETTING VERY PROTECTIVE – SAY HI TO ROBBIE. LET ME KNOW WHAT HAPPENS!” I’ve just sent him a reply telling him what Floyd said about being heartbroken. I hope he doesn’t say anything to anyone.

P.S. I’ve just remembered another thing that Jake said last night. Hayley mentioned me being Tess Taylor if I married him and he told me that he’d actually thought about that himself!