Friday 5th I went to the Victoria Park bonfire this evening in Warrington but there was no bonfire, just a firework display and a few fairground rides. I was with Lizzie, Zoe, Freda, Poppy, Lucy and Rani and we met up with Brett and a few of his mates. Then all our lot went home early except me, Lizzie and Zoe so we just hung about with Brett etc.

They were all pretty minging. There was Rob who’s 16 with blonde hair who’s normal height and thin. Reevsey who’s 16 too, I think, and tall, quite fat with blonde hair. A little lad who I think was called Chris who’s apparently 17 and nice looking but too short. And then there was Brett.

Damon and Leon and a few others also turned up at one point but went later. Emma and Keira were there with Davis and his lot. Nathan was with them somewhere but I didn’t see him. I’m not too bothered. It could’ve been awkward and I looked a complete state!

We got sick of the so-called “bonfire” so we headed for McDonald’s in town. I got told that Reevsey liked me but then Zoe said she liked him. They ended up going with [snogging] each other and are now going out.

We met up with Emma and Keira again in the bus station and Emma ended up getting a lift home with Lizzie’s mum with us. As we were all walking to the Golden Gates where we were being picked up, Rob said to me and Emma sounded and looked like we were popular. I’m not sure what made him come out with that other than the fact we were talking about a lot of different people. I was quite flattered by that comment of his.

I like talking to Emma. She’s a good listener. For example, I was saying how I was worried about Hayley coming back, with the Aled stuff that’s been going on and all, and she made me feel so much better by telling me that nobody really takes Hayley seriously because most people know what she’s like.

She also said she’s in a similar situation with Nicola Banks. She says she can’t relax around her and has to watch what she says because Nicola, like Hayley, overreacts and can’t see how unreasonable she’s being. She told me that she wasn’t really enjoying college, partly because there are only a few people who she gets on well with. She says I’m one of them. That’s good!

I saw loads of Trotter in school today, just walking round. He’s had his hair cut. It’s still spiky but there are no blonde bits anymore. I was thinking just yesterday that he needed a haircut too!

Cat was doing a plan of who’d get together with who at the party next Friday in Biology. Lizzie and I helped her along with it. It went something like this: 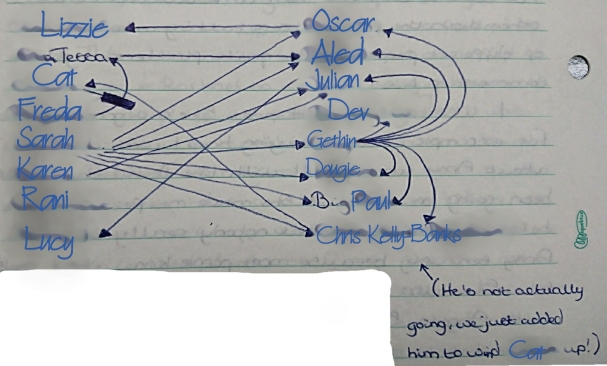 Someone told Gethin what’d been written. I don’t think he was very pleased. Notice Cat’s blocking off of the arrow between me and Freda. That’s her job for the night!