Sunday 22nd Mum took Abby and I to Manchester today to get more stuff ready for going back to school. I ended up getting cheap stuff and not bothering with a pair of expensive shoes but this evening my mum’s decided to call me selfish.

She said it was because I made her carry my bags but, when I pointed out about the clothes and shoes, she’s now decided I’m selfish because I don’t want to go on the ski trip with school in February. The other day I said how annoying Cat had been with her moods in Belgium and how I didn’t really know if I could put up with her but I also feel really guilty that my parents have to pay about £1000 so Abby and I can go. Mum and Dad have already paid my £180 deposit and they can’t get it back I don’t think so I can’t not go now. Also, I’d be letting Cat down badly and she’d probably never speak to me again.

I do want to go though, I just can’t see it being as good as Austria but that doesn’t mean I won’t enjoy it. Mum just doesn’t believe me that I want to go. I just feel so guilty about it, that’s all.

We phoned Rhian this evening. Not a lot’s been happening up there either by the sounds of it. I started writing a letter to Duncan earlier on so I just asked her if I should send it. She said I should and that she’d make him write back. This is a copy of the letter: 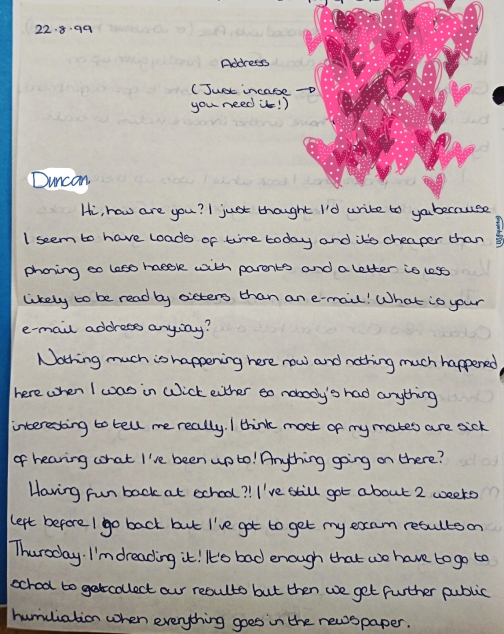 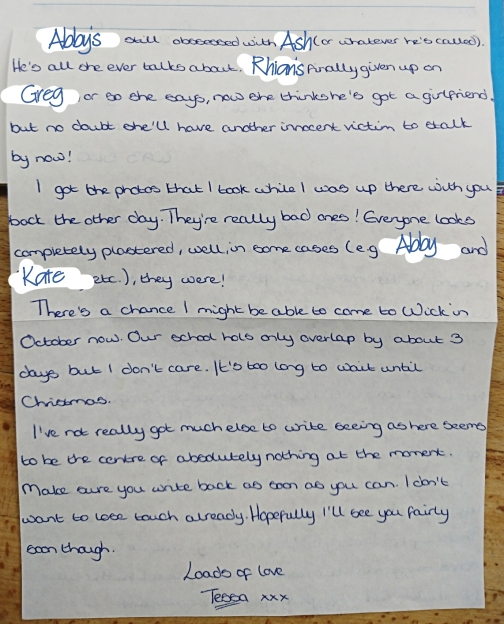 She said she’s seen Duncan putting up a shelf… badly. But that’s it. Abby said that when she was speaking to Rhian, she heard Uncle G shouting something like, “Have Tess and Duncan spoken yet?” She also asked how Rhian’s mum knew. Rhian said she’d been talking to Laura and Duncan’s mum, I think, and then asked Rhian what she knew. Rhian said she didn’t know but I don’t believe her.

I don’t think my mum knows (but I’m not sure) because when she was talking to Auntie S before, she said something like, “They keep going on about what a wonderful holiday they’ve had but I’m not sure what was so good. I won’t ask, I don’t think.” Then they moved on to talk about Rhian’s, Abby’s and my plan to see each other in October. I don’t know if it’ll happen.

Monday 23rd Mum, Abby and I went to the Trafford Centre today for more shopping because we didn’t get it all done. I got fixed up with a pair of Pod boots and I also got a metally, flowery necklace, a new watch and a pack with an ankle/wrist bracelet, choker and ring in it. [Like these which are back in the shops at the moment. I’m old enough for fashions to come round again. Boooo!]

This evening I went to the Sports Club because Hayley wanted to watch Liverpool play Leeds on Sky. I didn’t want to watch it really but I was bored so I went anyway. It was weird because Hayley predicted before that Liverpool would win 2-1 and their scorers would be Camara and Fowler. She was right!

There were these 2 lads in there, one who we know because he works there and his mate. They were both nice but this tarty woman ended up chatting them up and taking them off to The Plough. But it was funny because on her way out, she tried to push the door open from the wrong side and walked head first into it, making a complete fool of herself! We weren’t the only ones she’d been annoying because Jack Eddison and Tunde S out of our year commented on her and laughed at her too.

I posted Duncan’s letter tonight. I also spoke to Rhian too who told me that he’s been busy because Kate’s apparently rather fit cousin who’s just turned 16 and who’s from Orkney is in Wick. He’s been going to their school while he’s there and has been hanging round with Duncan. He’s called Jamie. Rhian said she’d tell Duncan that a letter was on the way and that he has to write back. I hope he does and soon.