Sunday 8th I’ve had to have a change of colour. I can’t find the blue pen under the heaps of stuff in Rhian’s room!

We went to Thurso’s Viking Bowl place this afternoon with Amelia, Kate, some girl called Jennifer and Duncan. He was being quiet today (probably because he wasn’t drinking alcohol!) and was usually stood with the adults who came or over at the juke box putting on dance music.

He did follow me over to it a couple of times and was being a proper gentleman by letting me have the green bowling ball when I needed it too and by offering to buy me a drink from the venders. I didn’t let him buy me one but Tom got one off him which he didn’t want so I ended up drinking it instead. I kept the ringpull! → 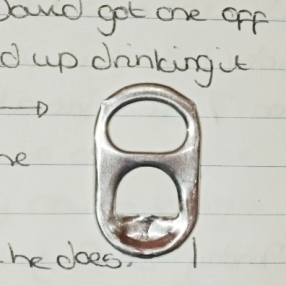 I got a few glances off him but he didn’t really do anything that suggested he like me. I don’t think he does.

I remembered this morning that when Duncan was pretending to be asleep he was actually watching me and when he was holding the torch in the talent show, he kept looking at me from the dark corner he was in. I could’ve been mistaken I suppose. I don’t think anything would develop anyway because he seems a bit shy.

Afterwards, the others (not me, Auntie S, Tom or Minnie) went to Safeway. Duncan got a lift to the bowling with us but went back with someone else. I know he knows my name at least because someone rang his mobile and he said who he was in the car with on the way there.

Okay, I’ve found the blue pen in my bag which I’d left in the car.

This evening, Rhian, Abby and I met up with Kate down the town and we went for one of our nightly wanders in search of Greg Thompson. We found him with his friends, stood on their usual corner. Abby’s decided she fancies one of his mates called Ashley Ewart but I can’t see the attraction myself. They waved at us when they got in the car.

We also saw Ben McFarlane who was in a car with 2 other lads (I think it was a red Peugeot) and he waved too. That was about it really.

Monday 9th Rhian, Abby and I took Tom swimming this afternoon. Rhian didn’t like that idea but it was tough because I felt mean seeing as we’ve been going down the town with Rhian nearly every night.

Ben wasn’t working at the pool, in fact I‘ve not seem him at all today. We walked past his house tonight and Rhian told me the window of his room was the one at the left of the front door but we didn’t see him.

Down the town tonight we did see Greg and Ashley, and Ashley was riding round on a little BMX-type bike and he was saying, “Will any of yous get off with Gary?” – Gary being this little lad who only looked about 11! None of us did!

Oh yeah, I did see Duncan twice today. Once was in his café when I walked past and the other time was when Abby and I took Tom and Minnie to the trampolines and he shouted, “Hi Tom!” and looked at me before he carried on walking.

I really like him. Nowt’ll happen though. It hardly ever does with me.