Wednesday 21st Breakfast was almost as bad as the meal the night before and there was evidence of previous meals all over the cutlery!

We went into the centre of Brussels in the morning and visited the Manneken Pis (I didn’t realise until I saw it that it actually was what it sounded like!), St Michael’s Cathedral and the Grand Place. The centre was far nicer than the outskirts. 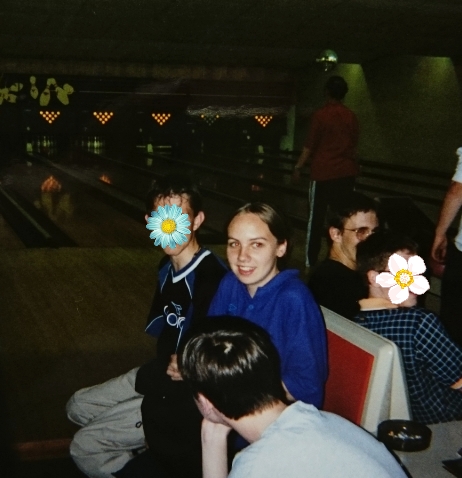 Emma decided that afternoon that she rather fancied James Douglas (Dougie) but went off the idea of chasing him once she realised that Keira still really likes him.

We had a concert that evening in an amphitheatre thing in Deurne. It went really well, although one particular bloke in the audience had either been experimenting with illegal substances or was extremely bladdered coz he was jumping round, dancing and clapping, singing and shouting and staring at Miss M all through the concert. It was very hard to keep a straight face.

In the evening we ate the packed lunches we’d been supplied with by the hostel and got back on the coach. It was only after we’d eaten that we were told parma ham was raw. Gethin then kept us in hysterics on the way back to the hostel with his theory on why the food was so crap.

We had the rest of the night free to do what we wanted so we visited each other’s rooms. Everyone was drinking but no-one got really pissed. Some of the lads from my year (Davis, Ed, Dougie, Brian Short and Gethin) discovered a room full of loud, tarty Essex girls so my room were not amused. We ended up with Patrick Campbell, Anthony Wiley and Charlie Wilson lying on our floor so we didn’t get to sleep until about 4:30 am.

Patrick was saying that the lads in his room (those 3 plus Joe Anson) had been talking about us last night and apparently it was said that I had nice eyes.

The manager of the park we did the concert at today said we were brilliant and wants us to go back and do all our concerts there next year.