Saturday 26th I was bored again today so I decided to go and help Mum on her ‘Pick a Lollipop’ stall at the primary school Summer Fair. It was okay. I was hungry so Mum sent me off to the bakery for food. John Baker was working. He’s gorgeous! He’s tall with dark hair and sort of sqaurish glasses. Apparently he’s a bit of a geek but he’s bloody gorgeous!

He served me and forgot to tell me how much to give him until he got to the till. He smiled at me and took a heck of a long time handing me back the change as our hands made contact! He only lives across the road but I don’t think he knows I exist!

It’s Lizzie’s birthday today so me, her, Cat and Karen went to the cinema to see Cruel Intentions. It was quite good actually. Ryan Phillippe’s pretty nice too but he has a look of Robert Osbourne (a lad in my form) about him. 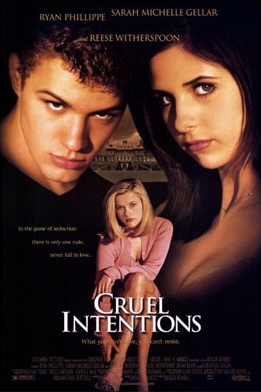 After the film we went to McDonald’s and then back to the cinema to get picked up by Lizzie’s mum. As we were waiting, I noticed a lad on the ice cream counter. It was really quiet and he was just stood there in his apron and baseball cap. I love caps on lads, they just look good in ‘em and this lad in particular did too!

He was quite tall and lanky (the sort of lad I subconsciously go for!) with blonde hair, big eyes and pinkish cheeks. He had quite a big nose (well actually it was more of a beak) which gave him a look of Ferny. He wasn’t drop-dead-gorgeous or anything and most people probably wouldn’t look twice at him but I did. That’s probably why so many people think I have bad taste in that department. Maybe it’s true! I think it is actually!!