[If you read this post, I demand you tell me about your first snog in return!]

[I’d got a new, relatively boring diary. No Garfield, Boyzone stickers or dolphins this time.]

Friday 21st It was my last day at high school today. I’ve officially left and the exams begin on Monday.

It’s been quite a good day actually. We didn’t have to wear uniform to school but we had to wear smart stuff and everyone kept telling me how nice I looked. [You can judge for yourselves…] 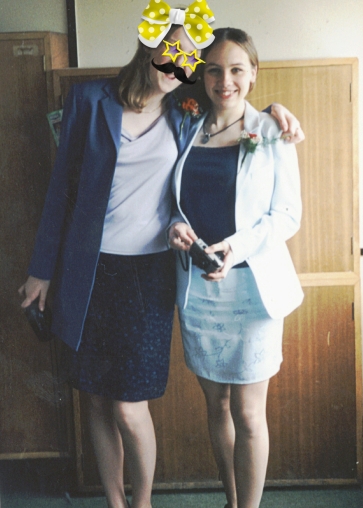 Ollie Bramwell looked me up and down a few times and all. (Little did I know what was going to happen later!)

We had to go to our 1st two lessons but didn’t do much and then we had an assembly and our buffet. Most people were crying (including Mr P!) and were going round hugging each other. Songs like ‘Simply The Best’, ‘As’ and ‘I’ll Be There For You’ were played. I got a bit upset at the end but more coz I remembered what a crap time I’ve had this year.

Emma and Olivia wanted me and Hayley to go into Warrington with them for a drink but we decided not to. We went back to Hayley’s for a while and then met up with Poppy and went in The Beech Tree pub. We got bored in there so we went to the café above the supermarket for coffee and chocolate cake before going to pick Hayley’s nieces up.

This evening, I went to a party at Freda Fernandez’s house. People were coming and going all night. One person who did turn up was Ollie Bramwell. He kept telling me I had such a nice body and was asking me when I’d got it. He also told me I looked nice with my hair down. He was pissed.

He kept hugging me and kissed me on the cheek twice. Then we were stood by the front door and [LIVE UPDATE: I’m cringing too much at this and making an involuntary ‘mnaarruuugghh’ noise as I type.] he had his arms round me and he asked me to go with [snog] him. I said no but a couple of minutes later I was snogging the lad! Tongues and all! It was alright but I wouldn’t do it with him again coz I don’t really like him that much.

He then laid me down on the stairs and asked me to have sex with him! I said no, of course! I just went with [snogged] him again instead. Apparently he’d also been with [snogged] loads of other people at another party as well as Freda, Jade Hancock and Lindsey Bullman. Oh, and Miranda, a Year 8 who fancies him.

It wouldn’t have happened if I’d been sober probably but I wasn’t! It’ll be embarrassing on Monday!

Ed also tried to go with me but I told him it’d be too weird coz I’ve known him all my life and he agreed. Aled Brownlee and Didier Lomas were being very nice to me as well but nothing much happened.

I’m tired so I’m going to bed. I can’t quite believe some of the stuff that’s happened today!