She’s bloody paranoid! Just because I wasn’t giving her my full, undivided attention, she decided to call me that. She has no right to say that. I can’t believe she seriously thinks I’d be like that, especially after all this recent business.

Then again after school, Emma was trying to tell me summit about Freddie Bevan and I was talking to her and not Hayley. As soon as Emma’d gone it was, “There you go again, being two-faced.” She then started accusing me of ignoring her in English. Well, every time I turned round, she was playing hangman with Cat Elliot and I did speak to her as well.

I tell you, I’m not putting up with this. If she can’t take the fact that I’m still speaking to Emma then that’s her problem. Maybe Emma doesn’t deserve forgiveness but it’d only make my life more difficult too. It’s not worth it. Hayley’s one of my best mates and if she’s that insecure that she thinks I’d piss off with that lot again and dump her for no reason then she really needs to sort herself out.

It’s not fair on me either. I don’t want to sound selfish and I hope I’m not being but it’s true. She makes me miserable. Every time I’m feeling optimistic, I can rely on Hayley to bring me back down to her depressed, bitter, stressed-out level. I dunno how much longer I can cope with her. I really want to tell somebody this but I can’t risk her finding out. She’s usually okay and I get on well with her but every so often she gets like this and I dunno what to do about it.

Friday 19th Hayley’s speaking to me again and I decided just to let her too. She was being all stubborn and quiet in the morning so I had another go at her about over-reacting. She was fine again though after she got a photo off Ferny. She’d been asking people to get one for her so Emma did. It’s quite a nice one of him actually but I’ve already got a few photos of him, although I wouldn’t mind an extra one. Hayley doesn’t know I still like him. I don’t as much as I used to but I still do a bit.

Ewan’s actually going out with Holly Lowe according to Hayley. She said she’d overhead it twice. I’m bothered but not as much as I thought I would be. Never mind, I’m gonna have to get used to the idea I think.

I went to the cinema too this evening with Hayley. We went to see ‘Shakespeare in Love’. Hayley wasn’t all that keen on seeing it but she came out saying it was better than she expected. I wanted to see it coz I’d seen it advertised and I like that sort of film. I thought it was really good. I was a nice film, not too depressing either. I really liked it. 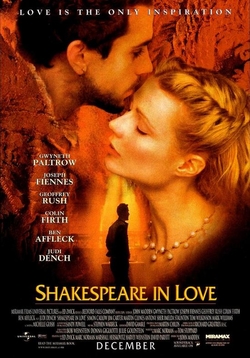 Afterwards, we were hanging about waiting for my mum to pick us up and these two 13 or 14 year old lads called us over. We ignored them. We saw them again as we were leaving and they were saying bye to us and asking if we had boyfriends. This means that everyone’ll get pissed off with Hayley now on Monday (including me) coz she’ll go on and on and on about it for weeks.