Tuesday 16th Ewan’s asked Holly Lowe out. Bugger! I really want to forget about him. I dunno why I liked him in the 1st place. I think it was summit to do with the fact that not many other lads went to Paris and it sort of went from there. I mean, it’s not like he’s even that nice looking either. Also, since he’s had his hair cut, he’s developed two bald patches on the back of his head! Who else can I like though?

Jade Hancock’s had her belly button pierced. I want mine done but I don’t think I’d be allowed. Even if I was, I probably wouldn’t actually have the guts to go ahead and do it.

Wednesday 17th We got our year photos and individual photos back this morning. The year one’s quite good and most people that I want to remember are on it along with some I’d rather forget. My individual one is hardly the best picture ever taken of me. It’s a bit close up and I’m not actually looking at the camera. I remember looking away coz I thought I saw summit move when it flashed. It’s okay though. [No, it’s not…] 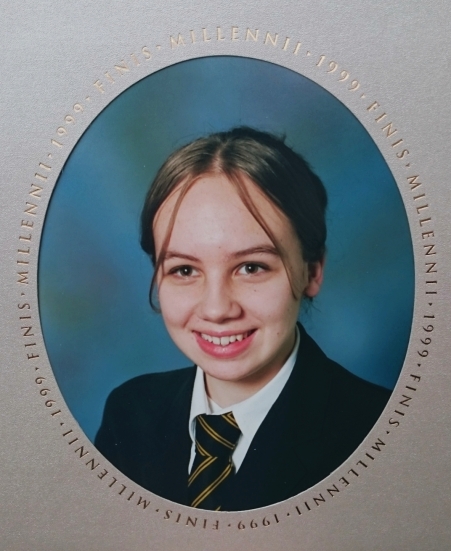 [I’m not sure which is worse, my early teens fringe or these ‘bits’, as we used to call them. And why am I even showing you this horror?!]

Everyone’s been cutting up passport size ones and handing them round to each other. So far, I’ve got Bella’s and Hayley’s and that’s it.

Emma asked everyone in the Music rooms if she could have one if theirs and if they wanted one of her, except me. Ewan and Adrian Ford were mithering Georgia too in Geography coz they wanted one of her. I don’t think she wants to give them some coz hers isn’t very good. Ewan never asked for one of mine although I can’t say I’m all that surprised.

Man Utd have just drawn 1-1 with Inter Milan (aggrigate 2-0) so they’ve qualified for the UEFA Champions League Cup semi-finals. YEAH!!! It’d be so cool if they got the triple. 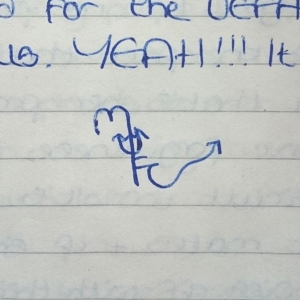