Wednesday 24th I told Emma about Ralph. She didn’t seem to care. Rachael was being really nice in P.E. too. Weird!

I went to see this film premier thing with Freda tonight. Sarah and Karen Brent came too. Fun. (NOT!) It was free so we thought it’d be crap. It was called ‘The Big Tease’ and it was actually quite good. It was about this gay Scottish hairdresser called Crawford Mackenzie who thought he’d got a place in the Platinum Scissor Awards but he’d only got a seat watching it really. Eventually he got in the competition and won. It was funny and had a happy ending and I really liked it too. 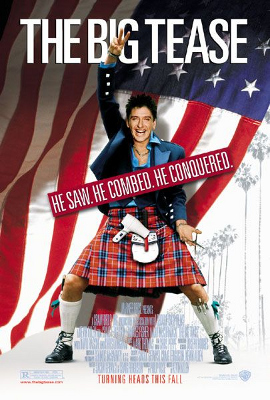 It was showing at the cinema at the Trafford Centre which is really big (20 screens) and comfy. I left my bag with Freda’s mobile in it which was actually a good thing coz the cinema managed to phone her mum on it somehow. I didn’t even realise I’d left it until we got picked up. Shows how alert I am!

P.S. Emma told us what Davis told her that Ewan and Adrian Ford think Georgia Dean is fit. But Hayley told me that Jade asked Adrian and he said he didn’t. I dunno if I believe him and I don’t really care. It’s the fact the Ewan does that I’m more bothered about and I didn’t think I really liked him anymore.

I do like Ferny though. I saw him heading off towards the village after school after he’d been standing on the road. I dunno where he was going.