I had a nice surprise this evening. Adam phoned me. [He was my internet crush. A/S/L: 15/M/Staffordshire] I wasn’t sure who it was at 1st coz he sounded a bit like Freddie but he told me before I said anything stupid.

I was really pleased he phoned actually coz it cheered me up a bit coz nowt’s really happened for a while and that was summit different that hasn’t been done every day. We just talked about GCSEs and stuff and how boring it was where we lived and stuff like that. I’d forgotten what a nice voice he had.

He still wants me to write and he says he waits to see if he’s got a letter from me every morning. I dunno if I will yet, I’m still not sure if it’s such a good idea.

None of the Year 7 lads turned up at lunch. Grrr! We also had Ralph (dickhead!) and Graham joining in at one point. Ferny was there too. (Babe!)

Friday 18th Hayley is unbelievable! I don’t think she wants William but she doesn’t want me to have him either. I’ve got to stop telling her I like him coz that’s what sparks it off. As soon as I said I liked him after Austria, she asked him out and now (today) I said I did like him and she told me that Lena had asked him what he’d say if Hayley asked him out for the 3rd time. Hayley reckons he said he didn’t now and went all red.

The first 2 times she asked him out she changed her mind. Does he not learn? I dunno what I’m gonna do. I s’pose there isn’t much other than keeping my gob shut around Hayley.

All the lads came in the gym again at lunch and started putting the kids off. Graham came over to me and asked me what we were doing and then asked if he and his mates were putting them off. When I said yes, he cleared his mates out for me. Cheers, Graham! (We still had Ferny and Freddie watching from outside though.)

In P.E. today, I saw William playing football and he saw me as they were walking in. He did smile.

I walked into Ewan for the 2nd time. I hate it when I do that. It must look deliberate if he knows I like him.

I don’t want to sound big-headed or anything but I will. I’m sure I keep seeing Ollie Bramwell looking at my legs while I’ve been wearing a skirt and I’m pretty sure it was me he was commenting on behind me today. He came in the gym too the other day and sat and talked to me and Rach until our mates came in. Oh, I dunno. 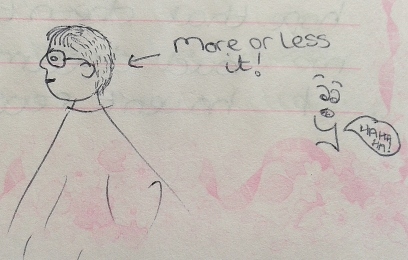 [This is Ollie and his shit haircut from June 1996. Despite what my incredible artwork suggests, Ollie was not morbidly obese.]

I had to do a concert for St Rocco’s at the Parr Hall tonight with Swing Band. We were good but the other people involved were pretty boring and Dougie and I were sat there laughing most of the time.