Tuesday 10th It’s just over 2 weeks now since we were in Austria. Everybody keeps bringing the memorable points up in conversation. Most people have started bringing photos in as well now they’ve been developed. I keep looking at my ones, wishing I could go back and do the week again coz it was so good. 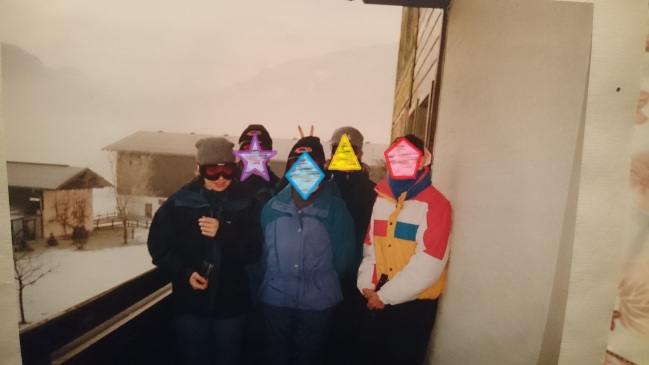 There’ve been rumours that the ski trip’s in France next year but so many more people want to go now coz they’ve heard what a good time we had. My sister’s one of them. I’m going to have to go whether we can afford it or not. I’ll pay for it myself if I have to but I can’t not go coz I’d know what I’d be missing out on.

Emma brought her copy of the photos in today. She showed most people at the ski slideshow meeting we had at break. They all laughed at the one of me looking shocked at the end of the toboggan run and at the one of Jez and his Pringles in his mouth. That was whilst his tongue was still intact! 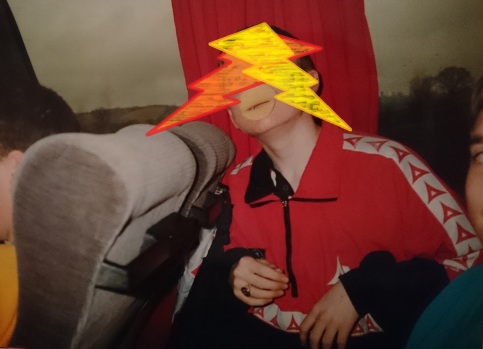 Hayley keeps asking me if she can ask Ferny out for me. Part of me wants her to but the rest of me doesn’t. I’d be interested to see what he’d say actually but I couldn’t be bothered with his mates (and mine) taking the piss all the time. [Excuses, excuses. I was just too scared of snogging.]

I’d rather he asked me out actually (as long as I knew he was being serious) because otherwise (if I asked him) I’d feel like I’d have to make all the moves because I was the one who wanted to go out with him.

I’m also worried that Hayley’s going to just do it anyway, whether I want her to or not because I think she’d quite like to know what he’d say as well. If she did do that and he said no then I’d be all disappointed and depressed and I’d think he didn’t like me at all and I’d get all embarrassed every time I went near him.

On the other hand, if he said yes, I wouldn’t know what the heck to do. At least I’d know he must like me but there’s also his mates taking the piss and I can imagine myself just avoiding him. [Standard panic reaction when a boy I actually liked showed the slightest bit of interest, for example the Bangor disco and ice skating hand-holding.]  The thing is, I would want to back out but I couldn’t coz I’d feel so snidey and for him it would be the Hayley thing all over again.

According to Emma, Freddie told her that Ferny had a bad hormone problem and that he fancies anything with 2 legs. That was probably what was happening in Austria and who knows what could’ve happened if we’d have had a bit longer there. [My bet is still absolutely nothing.]

You see, now we’ve come back to school, I hardly ever see him and even if I do we’re in a crowd so we don’t tend to speak to each other. If I could get him to come somewhere at the weekends or summit then maybe he’d like me again. Nothing’s saying he liked me in Austria but he can’t have disliked me coz of after the disco and stuff.

I might as well start a new diary next time I write coz there’s not a lot of room left in this one. Flippin’ heck! I’ve done about a page (over a page) of moaning today, just on one subject – Will Fernley. Oh well.

Erm… I need to fill some space up but I don’t know what with so I’ll write big instead.

[What an idiot. I didn’t want anyone to read this EVER.]

P.S. Even in another diary I will still like Ferny, Jez, Ralph etc., I will still complain constantly about Emma being a slapper and Manchester United will always rule (even if they can’t beat any shit teams at the moment)!