Monday 2nd I got these photos off Rachael H today because she didn’t really want them. They’re not very good ones coz she was just finishing off the film. Actually, I’ll stick them on the next page coz there’s more room.

[This is what had to happen in the olden days. We couldn’t just hunt down and gaze at a photo of our beloved(s) on the internet, we had to beg, borrow and steal or finish a camera film then wait for a week to get it developed in Boots. Teenagers have it so easy nowadays!]

Ralph was funny at lunch. He was having an argument with Trevor Hooper who was calling Ralph a ginger tosser and stuff and Ralph reacted by calling him Where’s Wally. Okay, it’s not funny unless you know what Trevor looks like. [He was the spit of Wally.]

Jez has got stitches in his lip and tongue. He was showing me at break. He did it playing ice hockey because he wasn’t wearing a mouth or face guard. He can’t talk properly and sounds really weird.

Freddie gave Emma his last Rolo so that gave me and Rachael an excuse to give him a really bad photo of Emma. I told him it was in exchange for the Rolo.

Every time we go down to see the boys, Jez comes up to the fence. Nosey! 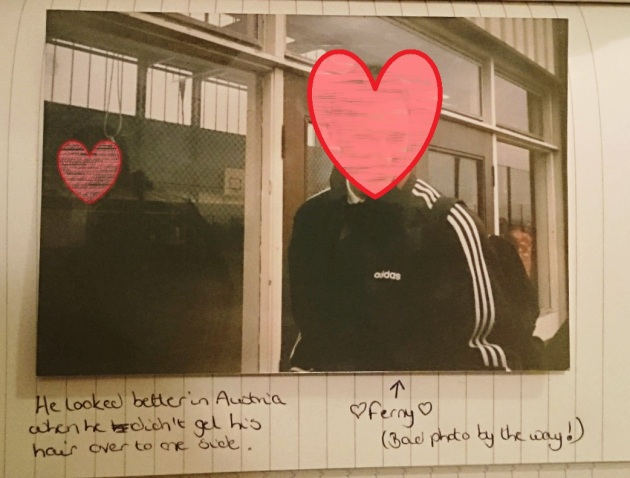