Wednesday 28th Freda was telling me and Emma at lunch about some letter on the wall of their French room that Dougie had written and signed off with Emma’s name. We didn’t believe her so we thought we’d go up and see.

They were the same letters that we had to make up for a homework once. You had to pretend that you worked for a company called Microscene and you had to write to somebody called Mr Vincent. Dougie’s letter was summit like this:- 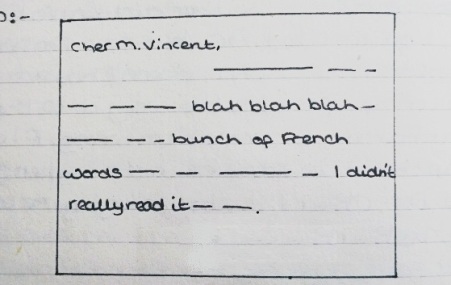 I had Geography after lunch and I was under strict instructions from Mme. E. Thornley to find out why he’d used her name. I asked him and he said, “It just seemed like a good idea at the time. It’s been up there for ages.”

Emma thought he’d done it coz it was to Mr Vincent [The surname of a boy she’d fancied once.] as though he was trying to make it look like she was writing letters to him but I don’t think that was the reason.

Emma said Ralph got into a bit of a fight with Jim Brackenhurst in Food. I think they were just pushing each other about a bit, nothing serious.

I’m trying not to let myself like Jez now. He keeps smiling at me and, in Geography, Mrs C laughed at summit he’d written and he was smiling at me in an embarrassed sort of way. I don’t think he fancies me coz he keeps calling other people Tess. Like Sarah and Rachael Hollins. Cheers Jez! NOT!