Wednesday 7th Mrs C’s shifted the desks about so Lizzie and I aren’t sitting in front of Dougie and Neil K. We’re still near them but it’s not as easy to turn round and talk to them. Dougie sounded quite disappointed actually.  He said, “Ah, we can’t talk to you anymore.”

Emma and Sarah tried to get my £1 back off Ralph but the 1st time they mentioned it he started singing Gala ‘Free From Desire’. The 2nd time he told them he only had 20p.

P.S. Hockey was good actually. We did it indoors too and I didn’t bother cleaning my trainers last night so I was squelching and dropping mud all round the sports hall!

Friday 9th I tried to get my quid back today. I caught him scrambling round looking for his bag amongst a load that had been dumped on the floor. It was said like this:-

T: Ralph, you owe me a quid.
R: No I don’t.
T: Yeah you do. Just think, you could have been left at Warrington Bus Station but I…
R: Yeah ok. I’ll give it you back sometime, like next year.
T: No, you’ll give it me on Monday or I’ll have your bike. 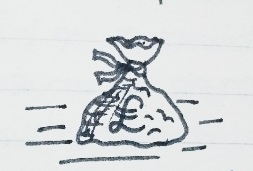 It’s a bit daft of him to get on the wrong side of people when everyone know which is his bike. Emma’s gonna tell him we’ll slash his tyres if I don’t get my money back! [Ha! Yeah right.]