Friday 18th We went to Granada Studios with school today. We got there and we had to fill in sheets but nobody bothered.

We went round all the stuff and rides and went on the tour at 1:25pm. I wanted to be in the same tour group as Jez but I’d have been split up from all my friends. I watched him go in and he was definitely looking at me standing there. He looked disappointed. I hope he was!

At the time when we were getting on the bus, me and my mates were sitting at the back at the bottom and Jez got on. I was sure he was going to sit down with us coz he looked at me again but his mates all went upstairs.

I the moment, I like (not in order) Dougie, Danny Barnes and Jez and I quite like Robert Osborne and Will Fernley.

I’m going out with Chris B (GA348860) off the computer now though. [The only way I could get a boyfriend was when they couldn’t see my fringe.] He was with two of his mates, Chris S and Carl and they all wanted to go out with me. He’s Chris B, 14 yrs, 8th June, Derby.

I IMed them back and Carl had a girlfriend by then [Quick work.] so I asked Chris B and Chris S some questions. [Like on Blind Date? Only without the holiday… or ever actually seeing each other.] I decided on Chris B coz I could talk to him more coz it’s his computer.

If anyone asks me if I’ve ever been out with anyone, I can say yes now! I don’t know how to dump him if I need to though. I’m worried that he’ll write gross email now too. I wanna know what he looks like too. 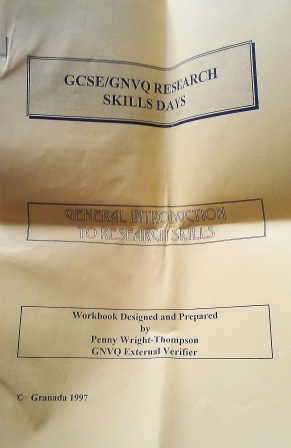