Thursday 17th All this morning we were practicing our presentation. It seemed ok but Orson was being stupid and saying Jez sounded like a sheep! Coz he did that, everyone kept laughing which meant we weren’t taking it as seriously as maybe we should have done.

Our presentation started off with George introducing who we were, Graham saying a bit about how well we’d worked and a small part about how well the mobile had turned out.

Lizzie was standing up all the time holding the ready-made mobile. Graham then handed over to Rachael and Robert who said a bit about why we’d chosen to do a ready-made and a DIY mobile and what made it different.

They then let Kai say his bit about what his role as Human Resources Director was. He then held up the sheet for Wes to speak about how he made sure everything was top quality. Then Jez said about advertising and what posters and other methods they used to attract peoples’ attention to our product.

He then let Johnny take over and show the TV advert, then we let Kai and Wes sing their jingle and then it was back to Graham to mention how hard we (the Production Team) worked.

That all took up 10 minutes which left 5 minutes for the judges to ask questions.

[That was just the practice. This is how it really went…]

At 12:30, all the groups that were doing their talks in the afternoon (some had already done theirs in the morning) went into the Drama Studio. Our group all sat down together and Emma and Rachael were untangling the mobile. IT RIPPED! The 2 of them had to rush back up to our work room and grab the Pritt Stick glue.

Everybody was panicking after the lights went down for the first presentation coz Emma and Rachael still hadn’t come back. Also, Robert had lost his blazer which had his speech in it.

The 2 girls came back and Robert had memorised his speech so we listened to the other presentations. First up was Group A – Aquatrix. Dougie was in their group and it was really good except Shauna Adams and Daisy Smith were cheerleaders which gave them another excuse to prance around the stage in short skirts and tight tops.

I can’t really remember the rest of the presentations coz I was only really paying attention to that one coz Dougie was in it!

Our turn came round and we got everything together and did it. The bloody video recorder wasn’t working so we had to do the advert last. It got a laugh and one of the judges was in hysterics!

After break we were told who’d won what. You didn’t get anything if you won something though. There was more than one category but Group bloody swotty A won overall! Bunch of tarts! We had a highly commended advert but that was it.

I have decided something. I like Jez now too. When they were announcing the winners, he was sat a few seats to the right in the row in front of me and I was talking to Cat. I could see him turned round out of the corner of me eye so I looked to see who he was staring it. It was me!!! We looked at each other for what seemed like ages and then he smiled and Georgia said something so I turned away.

Also, at last break (before we knew the results) I was on my own after taking the glue back and Jez came out of the room opposite and said, “Let’s hear it for the winners!” He was with Dougie. I sort of frowned at him and he said, “Group A.” I told him we could win and he smiled and agreed with me!

Dougie kept looking up at me when he was doing his presentation too. 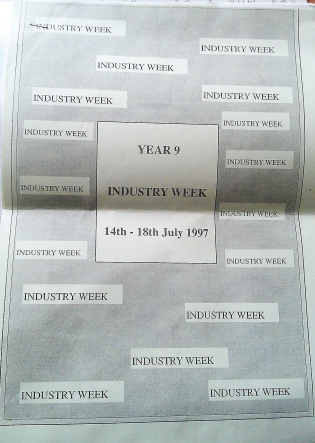