My Friday 7th At lunch, I was just standing in the yard at school with Emma and Lizzie and I spotted Dougie at the other side of it on his own. He walked towards up and went to talk to Gethin Turner. We took our bags to our form room and went to the shop. We were being followed by Dougie until we got to the school gate and he turned round and walked off again. I reckon he was looking for all of his mates who we saw out of school. He’s been left by them.

Later on in the afternoon, Emma came up to me and told me that somebody had sent to letter to Freddie Bevan and had signed it with Emma’s full name. The letter was a love letter and she has a suspicion that Heather Newton might have been behind it all. Gethin told her about it.

After school, I was waiting to go into the orchestra practice room and Dougie came in. It was dead good (for once) [I wonder why…] but I didn’t let on I thought so. [Ha! I was way to cool to enjoy orchestra.]

Zoe went up to Dougie and asked him about the letter. He just told us what we already knew and that Freddie was convinced it was from Emma. [Because it’s the norm to sign off love letters with your full name?] I just found it a good excuse to talk to Dougie!

Mr P keeps shortening peoples’ names. He keeps calling me T instead of Tess. Anyway, you could tell it was getting on Dougie’s nerves by the way he looked when he got called DOUG!

Dougie kept staring at us in orchestra and I kept looking up at the same time as he did. I hate it went that happens sometimes! [Rubbish. I loved it when our eyes met across the wailing trumpet section.]

When we were going home after, I asked Dougie what the letter actually said. He said it was something like,

“To my darling Freddie,

Will you be mine? I love you.

I walked with Emma and Zoe as for as the temporary block with him. Then he went to the phone. On the way home in the car, I saw Dougie outside the garages. That could’ve been the last time I ever see him. [WHAT THE HELL?! Why would it be?! That’s some serious pessimism.] I hope not! 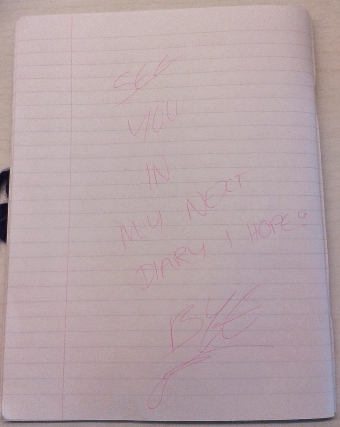 [And because this was the end of the notebook I was using, there was the obligatory crap in the back…]

FAMILY: Dad, Mum, Sister = Abby Rose [Or should it be Ricci?!] Simpson