Monday 29th Auntie G and Grandma S came today. We went to Dunham Massey – again. Mollie enjoys it there and I suppose it is a nice walk.

Britain have had a silver medal in the yachting (is that how you spell it?) [Yes. Good guess.] which is good. I’m off to watch it now. So, bye! 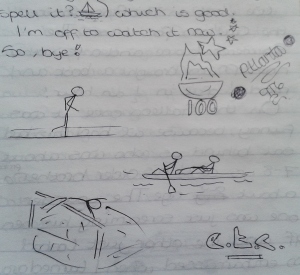 Tuesday 30th We went to Camelot (Abby, Mum, Abby’s friend Evie and I) today. Evie’s a bit like me and chickens out of rides when you’re about to go in and this really annoys Abby but it’s tough.

We went on The Rack twice, The Galleon four times, The Sorcerer twice and a few other rides. [Please see this post for diagrams.] Mum bought a book and read half of it in half an hour!

On The Galleon once it was funny because we had this kid sat behind us who was about 7 or 8 years old and his older brother, probably about our age. The younger one was just screaming his head off and the other just looked so embarrassed when I turned around! Bye!

Wednesday 31st Hello again! Until this evening I have just been lounging about.

Mum, Dad, Abby and I went to this big shop called Makro. I had a feeling I would see someone I know and I did. Jez Greenhalgh. He probably spotted me too. His was with his mum and dad.

Rhian phoned again tonight. Auntie S, Uncle G, Tom and Minnie are setting off for Ayr tomorrow and staying with friends until Saturday. Rhian stays at Grandma L’s until they both catch the train to Glasgow on Saturday which is when we go as well. Bye!