Sunday 9th Two of Abby’s friends, May and Evie, called for us today and we took them just about everywhere we could to tell them ghost stories. Bye!

[Inexplicable drawing of a bike.]

Monday 10th I had a really bad dream last night. It was horrible. I dreamt that when I opened my curtains there was a chain hanging down with a bald, rotting head on it attached by the tongue and a hand covered in blood!

You know how people say that your dreams are made up of bits and bobs seen or done that day, well, if that is true then I saw a dead, half-rotted sheep skull and leg, and I took the chains off the garage door. [And I’d been telling ghost stories.] I have just watched some of the X-Files. I hope that doesn’t give me bad dreams!

Lessons have been pretty boring as usual but the social side was a bit different. For a start, Pallav came up to Leona and me and said, “Wait til you see Ollie’s haircut!” It looks really daft! He’s had it stupid before though. 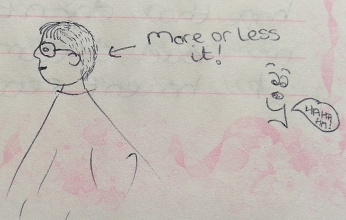 Hayley’s going to be an auntie for the 4th time when her sister has another baby. Sarah is having her hair cut to copy Leona. Leona is going out with this dickhead (excuse the language but it’s the only way to describe him) Daryl Fisher. I have no idea why! Bye!

Tuesday 11th Maybe Dougie really has got a kind side to him after all. I always thought he had but some of my friends didn’t. What happened (according to Abby because I wasn’t there) was that in the hot dinner queue, Abby shouted, “I’ve not got a tray!” and Dougie said, “Here, have this one” and handed her one he picked up. “Ta!” said Abby. And they all lived happily ever after! Isn’t that sweet!

Freda wasn’t in school today so I had a pretty peaceful day. I wonder how long it will last.

P.P.S. DON’T THROW A PARTY EITHER!