Wednesday 5th In school, dinnertime was horrible! Cat, Lizzie, Freda and Leona all went out of school so Emma and I decided to find them. As we were walking along the road towards the bakery, Emma and I were just talking and 4 girls in 4th or 5th Year were on the other side of the road. As Emma and I came nearer, they started laughing, talking and watching the two of us.

I knew 2 of them from primary school and they have always been well known bitches! (Sorry Mollie!) As those 2 crossed over, I had a horrible feeling that they would do something and I was quite scared actually. So was Emma, I could tell!

Anyway, one said, “I’m in the Mafia!” which made Emma snigger [yep, me too – now I’m not scared] but they must’ve thought it was me because one kicked me (not too hard) and the other chucked a bag at me! They then overtook us and pushed me into Emma! I had another bag thrown at me which missed.

Stupidly, Emma turned around and grinned at them and they threw bags at her. We went in the newsagents and they followed us. When we went out we managed to escape across the park!

We were both pretty shaken up and worried that they could pick on us again at school. I think we should have told a teacher but that could make matters worse!

After school, Abby and I went for a bike ride. There was a lamb in the ditch. It was too big for us to lift out so we went to the big house because he owns the fields. Sir B wasn’t in but we saw a lady we know(ish) with her little dog. She got the farmer but by the time we got there, the lamb had gone, hadn’t it?! Bye!

Thursday 6th In assembly today, I very nearly had to sit next to Dougie. Thank goodness I didn’t because I would never have heard the end of it from some of my friends.

At dinnertime it was funny because Emma went, “Oh look, Tess, it’s Dougie!” He wouldn’t have heard but must have been watching because as soon as I turned around he started walking off really quickly [I am not surprised] in such a funny way! I was more of a march than a walk! He was drinking 7up. [Essential stalker detail.]

Before flute, Dougie was there and so was everyone else. I was feeling a bit shaky because Leona had accidentally clonked me on the head with a cricket bat. We were all just talking in a crowd and Dougie was moving closer to me all the time. When I moved away he just followed me. He does that a lot to a few people, I’ve noticed!

On our bike ride today, Abby and I saw a squirrel (which is unusual here), a kestrel and we heard a cuckoo.

We also saw a kingfisher by the pond. It was there for ages and they are so lovely! I’ve only seen one once before, flying over the river. 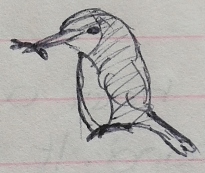 I really love owls and I really want to see one in the wild (I have but only from the car), especially barn owls. They have lovely faces and are so silent and soft when they fly. I’ve always like owls from when I was quite young and I got to stroke a captive barn owl once which was so lovely. If you can think of the smoothest, softest thing, it was about 10 times better than that! Bye! 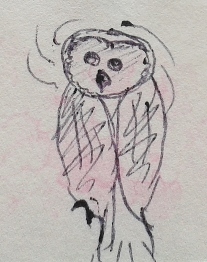