Tuesday 23rd I don’t know what’s been wrong with me today! I’ve been getting annoyed with quite a few people. Mind you, I had a reason to!

Freda – She’s been telling everyone I fancy Dougie and once was in front of him! She also tried to hit me in the arm but missed and hit me in the eye. Then she tripped up and kicked me in the ankle. I got so cross with her!

Emma – She was being completely stupid at dinner break. She was going round with a flower and sticking it under our noses and asking us if we thought it smelt of cat wee!

Lucy – She told everyone Emma fancied Kevin Hyde but I forgave her for that because I found out that Emma had done the same to her.

Cat – She was reading a U.F.O. book too slowly.

I have also been worrying about stupid things like the school trip to Wales, 3rd Year, and what I will do, where I will live and what I’ll be like when I’m older. That is when I haven’t been thinking, “Will I die before I get older?” [Oh, God!] I certainly hope not! [Well I’ve so far made it to 31 and I probably considered that to be bloody ancient at the time.] Bye!

Thursday 25th After school (before flute) was great! Emma got anti-vandal paint on her finger so Bobby & George (the twins) and Dougie were teasing her about it. Emma and Zoe went and got a can of Tango, shook it and sprayed it over them all! Bobby got the can off Emma and chased her with it then poured it all over her shoulder! She really smells of orange now!

Then Dougie challenged me to a game of tennis. I refused but Emma didn’t. We had rackets but no ball. Emma spotted one over the fence on a building site so we were all trying to get it out without much luck. Cat appeared with a brush from one of the cleaners and we got the ball but I had to go for my lesson.

On my way home, Dougie asked “Where are you going?” I wonder why he wanted to know?! I don’t think he likes me at all. He never really says much to me and, if he does, it’s not exactly a world record-breaking conversation! Bye!

Friday 26th Hayley somehow managed to stab me in the head with her biro. I think (I hope) I’m OK but I’m not sure. [I was fine.] Bye!

Saturday 27th I think my spots are coming back again. I had really bad ones just before Christmas until I went to the doctor. They went away, until now. Mum thinks it could be tiredness or periods. I haven’t had another one yet. It’s been about 6 weeks. Mum says she knows someone at work that only has one every 3 months but I can’t help worrying! Bye!

Sunday 28th I really did think that my spots had gone! I really did. For the last few months I haven’t had to worry about my fringe blowing back but now it looks like I will again! It’s not fair! I’ve had bad spots before and it’s not fair if it comes back. Hardly any of my friends get spots and, even if they do, it’s hardly any.

What really annoys me is when people like Emma or Leona get one or two little spots and are worrying about them – “Does it look awful? Can you see it? Do you think it will get bigger?” – and I have 50,000,000 spots everywhere!

I’ll stop grizzling now and tell you what I’ve been doing today. Not much really. It’s rained and I’ve been on the computer. Abby and I have also been sitting under the golf umbrella watching the guinea pigs. Bye!

Monday 29th Dougie had Home Economics today and made a pizza covered in Hundreds & Thousands! Urgh! Not only that but he was showing off about it and offering it round! Bye!

Tuesday 30th Just about everyone has turned against Freda today! Sarah had a can of Coke and Freda pushed her so it all splashed on our bags. Next, Freda knocked the can out of Sarah’s hand and it splashed over everyone sitting down. It landed on Emma who chased Freda off and threw the can at her. There was still a bit left in the can so Freda tipped it on Emma’s knee!

Here is a list of people who have hated Freda at some point and the reasons why:

Emma – They are just generally nasty to each other!

Leona – Freda thinks she fancies Ollie and is always hitting her harder than she’s supposed to.

Me – She’s always saying I fancy James Douglas and always teasing me.

Lucy – Freda’s always teasing her about her squeaky voice when she gets cross.

I saw Dougie when I was with Freda today. Typical! She says I went bright red and didn’t stop smiling for ages. It’s probably true but she didn’t have to tell everyone, did she?!

Abby and I set an obstacle course for Mollie. It’s really brill! It looks like this: 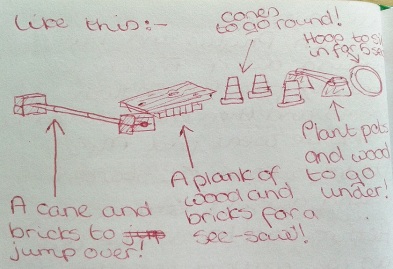 Mollie can do the course without her lead as long as she knows there’s a chocolate drop or two at the end. Bye!

Returned to the scene of my faceplant. Came away unscathed👍