Friday 15th We went to look at some puppies tonight! They were so cute! Eventually we chose a black one with one floppy ear. She chases mops and gets dragged along. She is so sweet! She licked my nose! We will collect her at the weekend. Bye!

Saturday 16th We went to the pet supermarket to get all the stuff for the dog. I will write down all the things we got so I can remember and I’ll draw a diagram next to it. [As you do.] Bye!

Sunday 18th Our little dog is here and is absolutely lovely! We’ve called her Mollie. It’s 10:50pm and I want to read the last chapter of Pride and Prejudice now. Bye!

Monday 19th Mollie wore her collar for the first time today. She didn’t like it. Mum and Dad just had an argument for the first time in years! Dad was sulking because Mum made him look after Mollie while she was watching telly. She said she’d had to take Mollie to the vet and mop up all the messes today. Dad said he couldn’t do all that because he was at work. I’m not scared about a divorce or anything, I just don’t want to get rid of Mollie! Bye!

Wednesday 21st We went to Grandma S’s today and Mum’s cousin was there with her two sons. They didn’t speak much until the disaster of lunch. Grandma had made meat and potato pies and, as I was eating mine, I came across what I thought was a herb. Then I thought it was a feather until I picked it out and realised it was fur with a lump of gristle under it! It was absolutely horrible! Bye!

Thursday 22nd Mollie fell in the pond! Mum thinks Mollie has started drinking more on purpose to make her wee more which means the mop comes out and she can chase it. Hayley and I went to the cinema later to see ‘Babe’. It was really brilliant because they used real animals and somehow made their mouths move when they spoke. It was really clever! Bye!

Sunday 25th Abby had a shock today when she put her fingers in Mollie’s mouth and she pulled out a mouse head! It was absolutely disgusting! It reminded me of the pies we had a Grandma’s on Wednesday!

I’m kind of looking forward to going back to school after half term but also I’m not. This is a table to show what I like and dislike about my school:

Thursday 29th It’s a leap year and Lucy has been going round asking all the boys to marry her. Abby showed me this thing today so I’ll draw it out and write the instructions down. 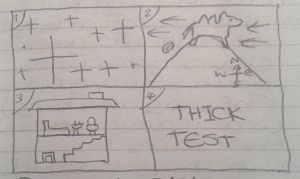 For each picture you ask:
1) Which is the biggest cross?
2) A camel stands on a hill and it lays an egg. The wind is blowing to the west. Which way will the egg fall?
3) This is a green bungalow. It has green chairs, green walls, green tables, a green roof etc. What colour are the stairs?
4) Which is The Thick Test?
[Let me know if you’re struggling and want the answers!]

We were told in assembly today about the end of year holiday to Wales. I want to go but the only problem is that you have to stay in a room on your own. What happens if you are in a haunted room miles away from friends?! Bye!