Sunday 4th At about 11am I had a phone call from Emma asking if I wanted to go round to hers for the afternoon. I arrived at her house at 2pm and I noticed her hair: [I don’t know if I considered it good or bad. Probably bad.] 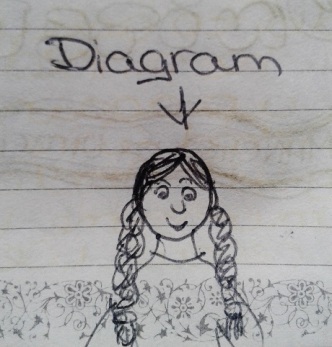 First of all we went in a field with a horse. I was terrified but it was eating grass so I relaxed a bit. Then it came over! I just felt like running off but it pinned us against a barbed wire fence! A neighbour came to our rescue. We then climbed a tree until Emma sat on my head and we decided to get down. Bye!

Monday 5th I just cannot get the cat to come in my bedroom whilst she’s lying under the radiator on the landing! [Probably because my bedroom was bloody freezing.]

IT’S SNOWING!!! I don’t like school much in the snow. There are always idiots throwing snowballs about which have a habit of hitting me in the face. Also it’s so, so cold inside school! The heating went off in Maths this morning and we all had our fingers crossed we’d get sent home. Then it came back on. Bye!

Tuesday 6th You’ll never believe this but SCHOOL CLOSED ALL DAY!!! It was brilliant! At 8:10am we set off from home and the traffic was crawling. At 9:30am, Mum decided to let us walk because it would be faster. A group of lads were walking away from school and one of them shouted that they’d heard on the radio the school was closed! We went in anyway [swots] and Miss McG told us to go home. I really hate Wednesdays because of drama so I hope we get the day off tomorrow too. Bye!

Wednesday 7th School was open. Drama was ok because not many people were there. In French we had a test which was solid! All we did in English was write scripts. Art was OK because Ollie wasn’t there. Science was AWFUL!! [Bearing in mind that this was underlined 5 times, the reason is a bit of an anti-climax…] Emma wrote TS 4 JD all over my science folder and TS 4 JD in a text book! Now everyone will know I like him! Bye!